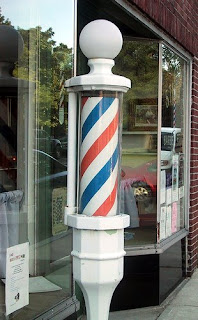 My son, now 3 years old, has developed quite an imagination. I really revel in the fact that he can wander into imaginary worlds or create imaginary games and beings. As a child, when lonely, I often relied on my imagination to pass time. It’s a great tool. I fully encourage my son’s ability to create things in his head.

It was only a matter of time before the barbershop would become a subject in his imagination.

For his birthday this year, among many gifts, my son received a lollipop that spins when you press a button on the handle. I suppose that’s the lazy lollipop eater’s way to lick a lollipop -- with the mechanism, there’s not much work to be done. The toy was a big hit with my son. He loved its sound and motion.

All this was created from my son’s wonderful imagination. Wow. I was so proud.

I played along with my son. I became the imaginary barber’s first customer, and, after my imaginary haircut, I even gave my son some imaginary money, which he deposited into an imaginary cash register that went “ding.”

But once I left the “barbershop,” my son expected me to come back as his second, third, fourth and fifth customers. That was when I knew I was in trouble.

I should’ve known better. After all, a game of peek-a-boo could keep him entertained for three days straight.

My scalp actually became raw from that lollipop spinner. I thought I felt blood dripping off my head after that 50th haircut, but I later found out that the drop was only a bit of milk from the barber’s water bottle -- I mean sippy cup.

“No, let me give you haircut,” he replied.

“No, I’ll give you ice cream. You want ice cream?”

“You want a new car? How about one of those big jumpers for your room? You want Mommy and Daddy’s room?”

“How about a later bedtime? You wanna stay up all night and watch cartoons? Or maybe you want all my money? Here’s my checking account number.”

For the record, I’m writing this column on my laptop computer during haircut No. 326.