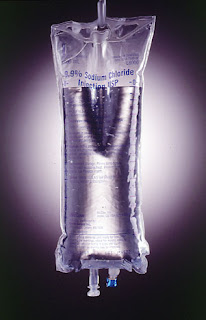 So I write this column at 30 years of age with a brand-new pacemaker in my chest.

I’m very frightened that I had to get a pacemaker at such a young age. In my usual fashion, I worry excessively and obsessively. Every little muscle twitch or gas pain near my heart makes me think my heart is going bad. I worry that this heart condition of mine is something that will haunt me the rest of my life.

In a couple of weeks I must go to the cardiologist for a “pacemaker interrogation.” I wonder if it’s anything like a police interrogation. I picture myself in a small room with two-way glass, sitting through the whole good doctor/bad doctor routine, the doctors trying to get information from my pacemaker to make sure the device is working properly.

“You’re gonna tell me what I wanna know,” the bad doctor says, “or I shut you down and install our later model that just came out on Monday.”

“Just tell him what he wants to know,” the good doctor pleads, “and then we can all go home.”

Friends and family have told me that I’m just “afraid” of pain and doctors, and that I don’t “black out,” I “faint.” I’d tell them, “That’s ridiculous. First of all, I don’t faint. Squeamish people faint. I black out. Second of all, I’m not afraid of the doctor. It’s not a mental thing. It’s a physical thing. I have to eat properly and I’ll be fine. That’s all.” I diagnosed myself.

In my life, I’ve blacked out (not fainted) about 12 to 15 times. Luckily, I’ve only injured myself three of those times.

The first injury took place about eight years ago. I was a maintenance man at Costco, cleaning up some trash on the floor. I'd been working at Costco full time and going to college full time. I hadn’t slept and hadn’t eaten much on this particular day. So when I stood up after cleaning up the trash on the floor, I got dizzy and blacked out. My eyebrow caught my fall on the concrete floor. I had to get 32 stitches. Worse, I chipped a tooth.

I blamed the fall on my lack of sleep and my lack of food intake. Everyone else said it wasn’t a physical condition but a mental condition, and that I “fainted” because I had been talking about tetanus shots with a fellow employee and I got “scared.” You see, I’d just recently cut my finger on a metal shopping cart, and I thought I might have to get a tetanus shot. (By the way, after
I blacked out and split the top of my eye open, I had to get a tetanus shot.)

My second injury took place almost two months ago. I was seeing the doctor for a chronic cough. While the doctor was explaining possible “health conditions,” I blacked out and hit the floor. I cracked the same tooth I’d damaged eight years ago. The doctor explained that my blacking out was a physical condition and not a mental condition, as I had said all along. I smiled with delight since I’d diagnosed myself correctly. Then the doctor said that my blackout episodes were serious.

“Serious?” I asked, as if calling her statement ridiculous. “No, this is no big deal. This isn’t a physical condition. This is a mental condition. I’m just afraid of pain and doctors. Just ask everyone I know and all the past doctors I fainted in front of before.”

My doctor put me through a series of tests that would rule out health issues such as seizures. I had a heart test, a brain test, blood tests -- I’m surprised they didn’t make me re-take my driving test.

My third injury took place when my doctor put me on what’s called a Holter monitor, a machine that I wore for a 24-hour period to monitor my heart. At midnight, while wearing the Holter monitor, I woke up to use the bathroom. I felt my heart racing, and I immediately thought, Uh-oh, my heart is beating pretty fast. And it’s thumping pretty hard -- like it’s going to explode out of my chest. That machine is probably discovering that my heart is no good. I’ll need surgery. . . .

The next thing I remember was my wife trying to get into the bathroom. I was lying on the floor, blocking the door. I had passed out, fell on the floor and tore a gash in my shoulder. I also sprained my wedding ring finger.

I’ve never had any health issues and I was afraid.

Armed with my set of car keys and holding one of them up like a sword, I tried to talk my doctor and four cardiologists out of the pacemaker they wanted to install in my chest. I told them that my heart rate problems were just a result of my sensitivity to doctors and potential health issues. “It’s a mental thing, not a physical thing,” I insisted. “Stand back! Don’t come near my chest or I’ll slice you! These Honda keys are a lot sharper than they look!”

Without going into the medical details of my condition, I’ll just say that the underlying message the doctors gave me was that I could die if I didn’t get a pacemaker.

Now that I have one, I freak out so much that I’m surprised I haven’t blacked out again -- or fainted, for that matter.
But while I had been thinking the worst of my situation since my pacemaker installation, someone just recently gave me a “glass is half-full” comment. My father-in-law said I had a machine that would back up my heart if there were any trouble. “Most people don’t have a backup for their hearts,” he said. “You’re lucky.”

I am lucky. With this new pacemaker, I’m better assured that I’ll stay alive long enough to grow old with my wife and see my 3-year-old son mature.

As I write, I feel I have a cramp near my heart. I’m worried it might be serious. I did just eat some cheese enchiladas and beans. But maybe I’ll call my cardiologist just to be sure this pain isn’t something more serious. Do you think I’m overreacting? Nah. What if . . . Don’t overreact, I tell myself. Don’t overreact. Life is too short.

By the way, thank you, everyone, for your thoughts and gestures.