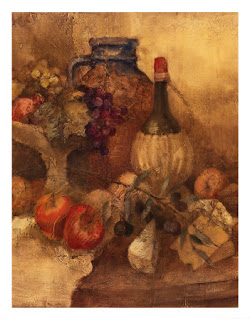 I recently underwent heart surgery. During most of my recovery up until now, I haven’t had much of an appetite. However, as I begin to phase out the medication and return to my normal self, my hunger for food is becoming strong. In fact, my hunger is so strong that I feel I can eat all day long. I’m starving, and I can use a large meal.

I think of my Grandma Picarella and my maternal grandmother, Grandma Balsamo. These two women never left the kitchen, as far as I know, and made enough food on a given day to feed all the troops overseas -- on both sides of the war. Both of my grandmothers claimed the phrase, “Most people eat to live; Italians live to eat.” And it was their mission to cook.

As a kid, I remember several occasions when my siblings and I would spend the night at Grandma Picarella’s house. We’d wake up the next day to the smell of homemade meat sauce cooking. In the kitchen, Grandma would be preparing meat sauce for dinner that evening and making breakfast.

Grandma would tell me how I needed to eat because I was a “growing boy,” and that I didn’t want to be “skin and bones because the girls like big and strong men.” Italian guilt always worked on me; I always ate at least two or three more plates of food.

Stuffed for the remainder of the day, most of us at the table would retire into the living room or backyard to rest and digest. Grandma would clean up the breakfast dishes, then immediately get started on lunch.

While preparing lunch, Grandma would offer up some pizzelles (Italian cookies) that she’d made. Us kids -- not able to fit even two more morsels of food into our bellies -- would always say, “No thanks.” The adults knew better. They just ate the cookies to avoid unnecessary servings of Italian guilt. Eventually, us kids took the cookies, too.

Lunch followed very soon after. A variety of sandwiches would line the kitchen counters like the Macy’s Parade floats line the streets of New York on Thanksgiving Day. You ordered your sandwiches as you would at an Italian football wedding where someone calls out sandwich orders to another person near a cooler of sandwiches, and that person throws the sandwiches across the room to the order-taker:

“Dominic, I’ll take a capicola sandwich. Throw over a salami and provolone.” Swish, the sandwiches would fly through the air like footballs over the guests’ heads. Quite a scene.

Lunch always included side dishes of all sorts. By the end of the meal, you always wondered where you found room in your stomach to store so much food. After stuffing ourselves, we’d again retire to the living room or backyard to rest and digest.
Grandma would clean up the lunch dishes, then immediately get started on dinner. Dinner was a major deal, especially if it was a Sunday dinner. Sunday dinner always started around 3 p.m. and could involve neighbors and friends.

Grandpa Balsamo used to open up his home to practically anyone on Sundays. He actually left the doors open and invited pedestrians in for dinner. Sometimes strangers would come in for dinner. My grandma always had plenty of food. Believe me.

Dinner usually kicked off with the antipasto. Antipasto includes cheeses, raw or marinated vegetables, cold cuts and cured meats such as prosciutto -- somewhat of a meal in itself.

Next came the macaroni. Now, for those who think I’m talking about macaroni and cheese, let me explain: Macaroni is what most people call "pasta" with meat sauce or marinara sauce. I never heard the word “pasta” until I was about 6 years old. So I still call it macaroni. Some of my family members will actually argue about whether it’s called macaroni or pasta.

Following the macaroni was usually sausage and meatballs or pork or veal -- some sort of meat dish.

Then came the salad, prepared with homemade oil-and-vinegar dressing.

After that came fruit and nuts, then maybe a pastry like a cannoli, spumoni ice cream and/or more pizzelles for dessert.

By the time the meal was consumed, the sun had gone down and the party had moved into the living room or the backyard for resting and digesting, allowing everyone to play cards or tell stories. Grandma would still be occupied in the kitchen, cleaning up the dishes and getting prepared for the next day’s meals.

The other day, as a means to answer my stomach’s calling for food, I cooked up not even half the amount of food my grandmothers would typically make on a Sunday. I didn’t make a dent in the meal. I’ll have leftovers for two weeks.

Anyone wanna come over for dinner?