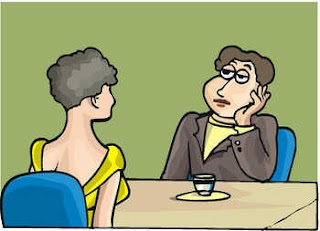 Before my wife and I tied the knot, we dated -- which goes without saying. On one particular Valentine’s Day at a very romantic restaurant in a Northern California town called Bodega Bay, we spotted an older married couple “celebrating their love.” They sat there and ate their food. And that’s all they did. They didn’t exchange words at all. They didn’t even look each other, just the food in front of them. However, when they left the restaurant, they held hands and strolled off . . . very much in love.

My soon-to-be-wife and I spoke of how odd the scene appeared to us. We’d never had a loss of words for each other, especially on Valentine’s Day.

Every Valentine’s Day has been an intimate occasion between my wife and I, though the last few since our 4-year-old son was born have been less about the two of us and more about the family unit, which is still very nice, just less romantic.

Last year, my son’s karate studio offered a sort of “baby-sitting” program for Valentine’s night, and my wife and I enlisted our son into the program so that the two of us could enjoy a date night together to celebrate our love like we’d done in the “old days.”

Valentine’s Day started out with a bang. The flowers I’d bought my wife the day before, which I stashed in the garage, had flopped. I was going to put them on display in the living room as a surprise for my wife while she was in the shower, but instead found myself running down to the grocery store to buy more. I made it home just before she got out of the shower -- I’d like to thank my wife’s need to shave her legs in the shower.

Once my wife was off to work, I got dressed, and then got my son ready for school. I noticed that my wife had managed to pack up the Valentine’s Day cards that our son would deliver to his classmates. She left some residual mess from the cards on the kitchen counter, which took me an extra 20 minutes I didn’t have to clean up.

I attempted to pack my son’s lunch, but since my wife and I hadn’t shopped for food in a while due to our busy schedules, there was no food to pack. I got real creative, which took an extra 20 minutes I didn’t have, and I accomplished the feat.

As soon as I finished making the lunch, my wife called to remind me that lunch would be provided at school that day and not to pack a bag for our son. I’d like to thank fragile bones in my body, the logic that kept me from angrily sticking my fist through a wall.

The next task was to get my son to school on time. Of course, I couldn’t make the trip without a stop at the gas station -- I’d kept postponing the stop because my busy schedule hadn’t allowed me the time. I managed to make it to the station on fumes and get my son to school just in time.

On my way to work, my wife called again to tell me how work was working her like a rower on a slave ship in one of those slave ship movies. I hadn’t even started work for the day and I already felt the same way. And just as I was about to say,
“Things can’t get any worse,” things got worse.

I’d forgotten to finish a task I needed for work that day, a task that would normally take two hours to accomplish. I rushed home, finished the task in a record-breaking 20 minutes -- 20 minutes I didn’t have -- and then left for work.

The day continued on in the same fast-paced, hectic fashion, and when my wife and I met back at the house, each under the impression that the other would pick up our son at school, we realized the day was clearly not over.

My wife and I then rushed to make our romantic dinner reservation, which was almost given away, and finally got the chance to relax at the table. We didn’t say a word to each other. We didn’t even look at each other because even the simplest tasks, such as eating, required our full attention when in our particular state of being. Out of the corner of my eye, I noticed a young couple staring at us, and whispering to each other about how odd the scene of my wife and I had appeared to them.

I really enjoyed your article about Valentine's Day. It seems that life takes over. We don't even realize it's happening. Your article made me realize that regardless how things appear on the surface, we don't lose what really matters. It's just a little more concealed.