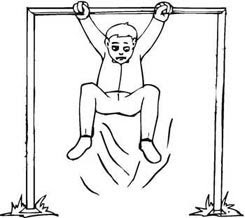 The recent warm weather was the catalyst for our adventure to the park the other day. My wife and I were happy to take our 4-year-old son there to have some fun in the sun.

There on a large parcel of land nestled within our housing development stood a fortress of play equipment colored in vivid hues, enough to put a smile on anyone’s face. My son loves the park. He loves to run. He loves to slide. He loves to swing. He loves to climb. And my wife and I love to see our son when he loves anything. And we love to participate in what he loves to do.

And so we were glad to play with him at the playground that day. I took a run down the slide following my son’s ride. Every time I go down those park slides, I always promise to never do it again due to the static electricity that the friction of the run causes when I go down, sending enough electricity through my body to start a vehicle with a dead battery.
But for some reason I always forget that promise.

The big smile that I was wearing on my face when we entered the park had turned into a big frown. I was upset that the slide electrocuted me, upset that I’d forgotten about my promise never to ride down the slide again, and upset that my wife was laughing at me for getting so upset. I was . . . well, upset!

“It’s not funny,” I said to my giggling wife.

“Stop sulking like a big baby,” my wife replied.

So my wife, in an attempt to prove that the slide couldn’t be that bad, went down the thing, and was surprised at the amount of static electricity that shot through her body. Her smiling face instantly changed. She looked as if she’d fallen into ice water -- wearing only a bikini.

I hate to say this, but my smile returned -- in a big way. I was so giddy that my fun, adventuresome spirit returned. And I decided to join my son on that spinning wheel ride -- you know, that circular wheel that you spin, then climb aboard and go round and round until you throw up.

Yeah, I don’t like to throw up, and I always hated that spinning wheel ride for such reasons, and so why I joined my son for a spin really was, and still is, a mystery.

Needless to say, my wife’s smile returned. More accurately, she was laughing hysterically at me as I displayed all sorts of facial expressions that, as she told me later, resembled the elasticity only available to animated cartoon characters. I was not happy.

The day continued in the same fashion. My son had a blast, and survived the park adventure without a nick. My wife and I, however, didn’t make out so well. My wife lost a lock of hair on the extended hanging bridge, and she scraped her knee when she fell off the play dinosaur in the sand box.

I twisted both my arms on the monkey bars while showing my son how to swing, I got the wind knocked out of me when I fell off onto my back into the sand while riding the swings at high altitudes, and I twisted my ankle on the spiral ladder in a mad dash to save my wife while her hair was being held hostage by the extended hanging bridge.

Leaving the park, feeling very defeated, my wife and I exchanged a brief dialogue about why having an only child has its drawbacks.

“We have no choice but to play on the playground equipment with him,” my wife said to me. “If we gave him a brother or a sister, the two or three of them could play together at the park, and we could sit back on the safe park benches with the rest of the parents who were smart enough to have more than one child -- and never be harmed by the playground equipment ever again.”

For a moment, I considered another child. I recalled the joy of my son being born, and re-lived through a daydream the experience of bringing him home, feeding him, cuddling him . . . changing his diapers, the endless crying, never sleeping at night. Then I said to my wife, “ How about we just encourage the boy to bring his friends to the park?”

My wife, who was also daydreaming about having more children, without hesitation agreed with me. And that was that.