Bad TV not For My Kid 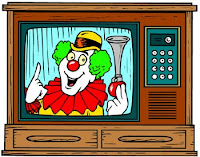 Before my son was born, I made a vow to myself that I’d only let him watch “good” TV. Shows with singing octopuses or barnyard characters that talk like babies would be off limits. I didn’t want my son to act like a girl or grow up talking like a baby. He’s a boy. He has to grow to be a tough man. That’s what I was taught, and that’s what I’d teach my son.

To explain how serious I was about this viewpoint on television content, I’d like to recall my son’s first birthday. He received several “bad” TV shows on DVD as gifts. I gave the disks to his friends, as I did not want my son watching “bad” TV. My son was sad, but I figured he’d thank me for it later in life.

I introduced my son to “good” TV from the start, showing him the classics like the old Looney Tunes cartoons. Ah, that’s entertainment. But ever since going to school, my son has been finding out about “bad” TV. His friends talk about “bad” TV shows and characters from those shows. His teachers have even played some of those shows for the class. And now my son wants to watch that stuff on TV at home.

And while I want my son to grow up to be a man, I don’t want to be cruel to him, and I certainly don’t want to alienate myself from him, either. So when the boy asked if he could watch “Oswald,” who happens to be a singing octopus, I gave in and said I’d watch it with him.

And then I saw what happened to my son when he watched the show. He loved it. Fear hit me harder than a knuckle sandwich. What if the show is actually “good?” That would be horrible. Either way, I wouldn’t let myself find out. (I didn’t really watch the show.)

But as soon as I made that decision, that’s when my eyes betrayed me, sneaking peeks at the blue octopus singing on television. And once my eyes got a glimpse of the program, that’s when my brain betrayed me and got emotionally invested.

I felt like a diabetic succumbing to his “no sugar” diet, devouring chocolate like that kid Augustus Gloop in “Willy Wonka and the Chocolate Factory.” I actually really enjoyed the show.

And then I wanted more. I started watching all the “bad” TV available on those “bad” TV stations. I got so hooked on the shows that I found myself watching them without my son in the room.

I made a vow to myself that I’d never tell a soul that I actually watched and, worse, enjoyed those “bad” TV shows. I’m a man. I have to be tough. I can’t be watching chickens and bunnies saving the world. But some of these programs have good stories about teamwork and moral dilemmas. And I have to admit, there were several instances where I was on the edge of my seat due to the gripping drama presented.

My son is now 4 years old, and he and I continue to watch the same shows on TV. And we love them. He’s agreed not to tell anyone that his dad enjoys the programs as much as he does.

The other day at karate class, I sat outside the studio with many other parents to watch our kids practice martial arts. I noticed that several mothers were talking about children’s TV programming. I became very interested when they brought up one of the shows I watch called “Oswald.” They made fun of the show, saying that it’s so silly because most of the characters never work a job but always seem to have money to buy things like ice cream. These mothers were breaking the show into pieces with some of the harshest criticism I’d ever heard.

I was irritated since most of these mothers probably watch soap operas where grease monkeys on the show look cleaner and are more made up than most people at weddings. These mothers were criticizing "Oswald,” yet their soap opera women always seem to be dressed for the prince’s ball, with nowhere to go except their girlfriend’s house to dish out dirt on other characters in the show. (It’s always amazing to me how many of these women in these programs show up to places with nothing in their hands. No purse in hand, and clothes that couldn’t possibly accommodate a set of car keys. Yeah, that’s realistic.)

I couldn’t let these soap-opera-watchers bash my favorite TV shows, especially “Oswald.” So I sucked up my pride and defended the singing octopus and his cartoon friends. The women were surprised that I watched such programs. But I didn’t care.

Ever since then, I’ve been proud to say that I love children’s TV programming. I’ve even got an “Oswald” T-shirt to prove it.