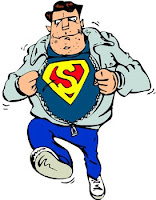 Family men are action heroes. We face a horrible, treacherous nemesis, far worse than other super heroes must face. We must stand up against the dreaded Domestic Gremlin, a creature not seen, but one that endangers our precious domesticated lifestyle, causing kitchen appliances to malfunction, allowing critters and other unsightly creatures to enter wife- and kid-inhabited living quarters.

If my wife sees a scary bug, one that will bite her head off . . . Super Husband will kill the pest and save the day! If my son hears a scary noise outside his room while sleeping, and he’s afraid it’s the killer cow that haunts his dreams . . . Super Dad will go outside and defeat the “dangerous” quadruped!

I use my super powers to fix things throughout the house (inside and out). I have super strength and can lift several bags of groceries all at the same time. And I can open any screw-top jar no matter how tight the lid was fastened in the factory.

Even outside the home, my super powers come in handy. At a restaurant the other night, for instance, our waitress brought my wife the wrong drink. I used my super powers to draw the lady back to our table, and then I told her, “My wife ordered a Diet Coke, not a Cherry Coke.” Within seconds, my wife had the drink she ordered, all thanks to my super powers.

I have a super hero costume. It’s a really thick flannel shirt that nearly deflects bullets. I put on that “suit” any time I need to carry out a super feat. At the end of the day, I hang my super suit on a nail in my very own “Bat Cave.” Yup, the garage (my bat cave) is where I keep all my wonderful toys like the toys Batman has in the movies. And while Batman has things like a bat wing, bat smoke and bat fire power, my super hero toys come in the form of screwdrivers, fly swatters and mousetraps.

That’s right, I’m the real deal, a true action hero. I’m so super that I think Hollywood will one day turn my story into a movie, maybe to feature action star Vin Diesel in the lead role. He’s got about the right build to play me, no?

So all was well in the kingdom of suburbia when out of nowhere came a villain far worse than the Domestic Gremlin. At first sight, even I doubted my super powers as Dad. This villain came in the form of a human of some sort, about 5-feet 6, black hair, brown eyes, wearing a white coat that went down to her knees. She was armed with a piece of paper that said I needed to see a cardiologist.

Simply put: About a year ago, my doctor said I needed to see a cardiologist because she found some problems with my heart. To save a long story from becoming longer, the cardiologist made me get a pacemaker.

As a super hero, my powers were rendered useless. I don’t know how I survived such a surgery, but I’ve since been in much greater fear of doctors, never before having encountered such a being for any other reason but to take a harmless physical check-up needed to play football as a kid.

The other day at a routine check-up, my doctor suggested that I get my blood taken so that the lab could check my cholesterol, even though, based on all the other million tests I did before having surgery, I looked as healthy as healthy can be.
“You don’t have to do the test, but it might be a good idea,” my doctor said.

“Well, then if I don’t have to do the test, then I won’t,” I said. She might as well have said, “I can punch you in the face if you want.” Why would I want to endure something unpleasant? Needles are sharp. They poke through my skin, bust through my veins and suck up my blood. I’m fine without the intrusion.

My wife said I was being a big baby. She has no problem giving blood, and even my son has no problems with shots, she added. And here I was, once a hero, acting like a coward.

The truth of the matter is that I never was a hero, at least not in my own eyes. I had no super powers, just average skills.

So there I stood, by choice, before my worst enemy, the doctor, who was holding a big, sharp needle. I laid down on a gurney, stuck out my arm, and let this monster stick me with a needle and steal my blood.

I was an action hero at that very moment, not for anyone else, but for myself . . . Until next time!