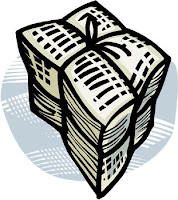 ELECTION HEATS UP:
As my son’s first day of kindergarten nears, nobody can clearly say who will win dibs on that first goodbye kiss. My wife’s campaign to the kiss is going strong with support from as far as her uncle in South Carolina. My support doesn’t leave the state, but it might be enough to garner that first smooch on Wed., Aug. 13. “I just want to kiss Mommy and Daddy,” said my son in a statement earlier this week. Conservatives feel that my wife’s lips are what my son really needs first for that all-important goodbye because, as the mother, sources said, she gave birth to the child. Liberals, on the other hand, said that it’s time for a change, and that in this democratic nation either parent should have a chance at the first kiss.

BOY SEEKS REHABILITATION:
My 5-year-old son checked himself into his room earlier this week for candy abuse. He admitted to sneaking candy from the candy jar on four accounts within the course of a day. “My son is surprisingly honest with his parents,” my wife said yesterday. “And he knows when he’s being too silly because of too much sugar. I think he just wants to cut down on the sugar intake, and we’re here to support him.” After an hour and a half in his room alone, the boy came out clean and with a new outlook on life.

HOT PURSUIT GOES THREE HOURS:
In a chase that lasted three hours and spanned the distance of 10 football fields but within the confines of a Stevenson Ranch single-family dwelling, my father-in-law finally captured my 5-year-old son in the outskirts of the living room, and then he tickled the boy into an uproarious laughter. “I just didn’t want to be tickled,” my son said after the fact. “So I ran.” According to Grandpa, grandparents are supposed to tickle their grandchildren, and they’ll hunt those little ones down at any cost to produce that all-important involuntary laughter and wriggling. My son’s belly still hurts from laughing as hard as he did.

NEIGHBOR CAT RUINS FRONT LAWN:
Despite efforts to keep the neighbor’s cats off the lawn, at least one feline left a mark that has killed the grass. “I remember a time when my lawn was perfectly green all around,” I said in a statement right now. “And now there’s a big ugly yellow spot right in the middle.” The said neighbor denies charges against him for aiding and abetting the criminal cat, claiming that his precious pets are all indoor animals. Various sources, however, said they saw the neighbor’s black cat cross their path on the sidewalk earlier this month. The damages to my lawn were $13.39 for Scotts Lawn Pro Step 4 lawn fertilizer from the Do-It Center.