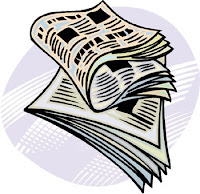 JET CRASHES, ONE MAN INJURED
A passenger jet carrying a reported 3,000 people from the Moon crashed in my living room yesterday morning. The damages were a nicked ear and a scraped cheek. “Our (5-year-old) son was flying his toy Southwest Airlines Boeing 737 over the Pergo Sea near the Love Seat Mountains when he encountered engine trouble,” I told my wife when she asked about my face wounds. “The vessel went down -- and it went down fast -- crashing into my head at full speed.” Asked if I was OK, I said yes, the wounds would heal. But now my son needs a new jet because one of the wings broke off in Daddy’s ear.

GIRL LATE FOR SCHOOL
A local kindergartener was allegedly late for school earlier this month. The student’s spokesperson, Mom, said her daughter’s tardiness was excused. “I sent her with a note,” Mom said. Since the incident, half the class has been asking if they could be tardy for class as well. “Which day can I be late for school?” asked my own kindergartener during what is now being dubbed the “I Wanna Be Late For School, Too Crisis of 2008.” School authorities said classroom attendance and punctuality are the necessary ingredients for success in any endeavor, school included, and they suggested that kids not be late or absent if they can help it. “However, yes, it’s true,” an anonymous school official said, “we will excuse a student if he or she has a note.”

HUNGRY HIPPO CHAMP GIVES UP BIG LEAD, NEW CHAMPS NAMED
Having easily captured the most marbles in the first five minutes of last night’s final game in the Hungry Hungry Hippo finals, my wife, the Hungry Hungry Hippo champion of our house last week, gave up a big lead when her hippo regurgitated several marbles, and my 5-year-old son and I snatched them up with our hippos, winning the game and the series in a tie over Mommy. “My husband and son only had about one or two marbles in each of their hippo bellies, and I had all the rest, save the last two or three in the center ring,” my wife said after the game. “And then there was some sort of toy malfunction where my hippo’s mouth got stuck open, and the marbles that I’d already captured just rolled out -- back into play. It’s really not fair.” Life isn’t fair, sources say. And my son and I acknowledged those sources as we accepted last night’s victory.

CONTRABAND FOUND IN KID'S BACKPACK
Last week, my wife and I caught our kindergartener smuggling contraband into his classroom. After giving him a hug and kiss goodbye, I noticed his backpack was half unzipped. Just as I was about to zip up the bag, my wife asked me to wait a second. “Right there in his backpack were three Matchbox cars, a harmonica, about a dozen toy Army men, and worst of all we found an extra bag of fruit snacks!” my wife said. Asked what the boy was trying to do with such goods, our son said, “I dunno.” My wife and I confiscated the items and have been conducting routine searches of the boy’s backpack. “It’s amazing what a kid packs in his bag,” I told authorities. “Anything and everything from key chains and random toy parts, to weeds picked out of the cracks in a sidewalk, and even rocks. A boy’s backpack is really his treasure chest.” My boy has since been clean.

we are looking for someone to make a movie from the book we wrote...please visit our website:
mamapleaseloveme.blogspot.com
and you tube site
mamapleaseloveme777
Thank you
Ford and Cotia

I'm a jazz musician - injoyed your "Confessions" article. Tell your wife that music has 3 ingredients: Melody, Harmony, and Rhythm. Words are an unnecessary fourth. My quartet (straight ahead swing) is playing at Charlie O's in Van Nuys (on Victory at Woodman) tommorrow (Sunday) night - 8:00 - midnight, no cover. I really think you would enjoy it. Roger - Tenorman