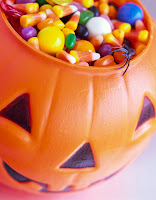 My wife left the house to meet an old friend for coffee, and my 5-year-old son was next door playing with the neighbor.

It was the day after Halloween. I sat on the floor in my living room alone, staring at my boy’s plastic pumpkin bucket of Halloween candy, debating whether or not to eat a piece. My wife and I had previously discussed saving only some of the best treats, and throwing out the rest. None of us needed candy.

“We already discussed this,” she said.

“What? I never agreed to throwing out perfectly good candy.”

My wife grabbed the bucket and stomped off toward the trash can.

“How can you throw out our boy’s hard work?” I asked my wife as I chased her out the door. “What kind of message are you sending him?”

My wife didn’t flinch. So I snatched the bucket of candy out of her hand.

“I’ll throw it away,” I said. My wife looked at me for telltale signs of sincerity, and, obviously satisfied, she turned and walked back inside.

I didn’t throw out the candy. Instead, I took it to the garage and hid it where nobody but I could ever find it.

“What’s this?” my wife asked the next day, holding the bucket of candy that could never be found.

“What’s what?” I responded.

“This candy,” she said. “I thought you threw it out. Why was it in the garage under the work bench?”

My wife marched out to the trash can with the bucket of candy, and just before she could throw it away, I stopped her.

“Listen,” I said. “You’re right. I should’ve thrown out the candy. And you’re right to throw it out now.”

And then I revealed a Rambo-style Army knife and my son’s beloved teddy bear from behind my back, and put the knife against the bear’s throat.

“If you so much as drop a piece of candy into the trash, you can kiss the bear goodbye. And you know what you-know-who will do if he discovers his bear missing.”

My wife froze. She couldn’t believe I could stoop to such a level.

“Set the candy on the ground,” I demanded. “Now slowwww-leeeeeeee step away from the plastic jack-o’-lantern.” My wife did as she was told.

“And now,” I said, “I want you to go inside and pretend this never happened.”

My son didn’t miss the candy. He never really knew how much he had in the first place. My wife told him it was all gone, and it was. I was taking care of that.

By Nov. 19, all the “good” candy seemed to be gone. All that was left was junk: wax lips, those orange peanut-shaped marshmallows and banana-flavored chews -- does anyone really like banana-flavored candy?

While under the Candy God’s spell, even I ate -- and enjoyed -- the banana-flavored sweets.

By that Friday, my wife and kid stopped saying hello to me. I had socially cut them off days ago, too busy digging through the pumpkin bucket for “good” candy. If I couldn’t find anything good after a few digs through the candy, I’d suck down one of those marshmallow peanuts to soothe my sweet tooth.

There were times I ate candy that tasted just awful. But I couldn’t spit it out. Instead, I’d swallow three or 10 pieces of other candy to hide the taste of the bad piece, then chase it down with a banana-flavored chew.

I’ve spent 26 days so far on my steady candy diet, under the spell of the Candy God, but I still have hope.

“Tomorrow is a new day,” I tell myself. “Tomorrow I’ll be victorious.”

Tomorrow I’ll most likely finish off the remains of my son’s trick-or-treating treasures.

But tomorrow I have a new enemy. This enemy comes in the form of turkey dinner, turkey soup, turkey sandwiches and turkey pies.

Thanksgiving Leftovers, I speak to you. Go easy on me.

next time hide it inside a tool box, not just under a table. or on top of a tall shelf, behind a book. Not that i have experience in hiding bowls of candy, i'm just throwing out suggestions of things i've heard