Donna Vita Corleone: The Godmother of the Park 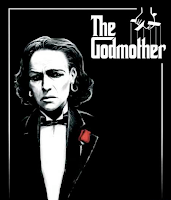 As far back as I can remember I never wanted to be a gangster.

Last weekend at the park, I watched a group of parents line up to kiss some woman’s hand. Must’ve been out of respect.

This woman. She entered the park from a back entrance I didn’t know existed. She knew everyone. And everyone knew her or wanted to know her. She arrived, and the place went wild.

My 5-year-old son and I arrived, and nobody could care less. That was fine.

But then this woman’s two kids are given immediate access to the play equipment, when everyone else had to wait in line for a turn.

“Excuse me,” I said to this woman. “We were waiting in line to go next.”

Have you ever heard a park full of noisy kids and talkative parents go instantly silent? Let me tell you. All eyes looked at me as if it’d be for the last time.

“We haven’t met,” this woman said to me. “You can ask around about me. If you could just allow me this once to cut in front of you, I know how to return a favor.”

I told this woman to go ahead, said my son and I would play on something else. She hugged me.

“How would your son like to ride that red scooter over there?” she asked, pointing to one of the scooters parked at the bike rack.

“No, thanks,” I said, coming to understand that this woman must’ve been some sort of Mafia Don. I knew not to get involved.

She called over to some woman sitting on a park bench, a woman she called Terri “Ten Kids” who, I’m told, gave birth to 10 kids. This woman said that my son was going to take a spin on Terri “Ten Kids” son’s scooter. Terri “Ten Kids” said it was certainly OK, and, before I could turn down the offer a second time, my son jumped on the scooter and rode off down the sidewalk.

I could feel this woman staring me down, probably trying to figure out if I was a good fella.

“Are you from the neighborhood?” she asked me. “What street do you live on?”

Geez, this woman was pushy. And nobody pushed me around. Nobody. Except for my maybe wife and, of course, people who are connected. So I told this woman that, yes, I was from the neighborhood. And I gave her the name of the street I lived on. I gave her my whole address, my phone number and even my social security number out of fear she’d have me whacked if I seemed out of line.

This woman grabbed a hold of me -- stopped me dead in my tracks. She said she’d send a couple kids to get my boy instead.

When her goons returned with my son, she gave him some fruit snacks from her goodie bag and asked if he wanted to take the red scooter home for a couple days. My boy flipped with excitement over the fruit snacks and the scooter offer -- he didn’t know what kind of danger he was involved with. I told the woman that we couldn’t accept either offer.

Before I could give the fruit snacks back, my son had already dug into the bag. I took his hand to leave.

“But what about the scooter?” he asked.

As I led my son away, I said, “Leave the scooter. Take the fruit snacks.”

Everyone at the park fell silent again. I should’ve accepted the scooter offer. But I knew what would’ve happened if I did. I’d be in. And once you’re in, there’s no getting out. You follow me?

Two moms at the perimeter of the park, with their right hands in their coat pockets, stopped me from leaving.

“She’d like you to join her at the picnic tables,” one of the moms said.

I told the ladies I wouldn’t go to the picnic tables. They couldn’t believe my response, as if I’d refused Don Vito Corleone -- in this case, Donna Vita Corleone.

“She’s gonna be disappointed, but we’ll tell Her what you said.”

After the message was delivered, this woman -- the Godmother of the park -- collected her kids and stomped off. Then all the parents at the park turned and headed toward me. I knew how this worked. They’d line up to kiss my hand, a sign that there was a transfer of power, power I didn’t want.

Turns out, everyone came over to tell me I’d been a jerk and that I’d hurt a nice lady’s feelings, someone who just wanted to be friends with me.

I guess I better cut back on the mob movies I watch.