Parenting Magazines Are For Moms 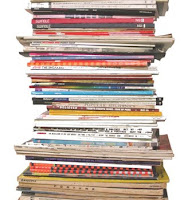 Parenting magazines have it all wrong.

Sure, they offer great tips, and stories one can relate to, and they showcase great products parents can purchase to make raising children easier and more affective. I know this. That’s why I bought a stack of parenting magazines the other day when I was feeling like a bad dad to my 6-year-old son.

But as I flipped through a few pages, I noticed the ridiculousness inside. About halfway through, I tossed it aside and grabbed another magazine. I found the same ridiculousness. The third publication was worse. There’s “ridiculous” and then there’s “really ridiculous.” Then you’ve got these parenting magazines.

Dads aren’t moms, right, readers? We didn’t give birth to our kids. We don’t get postpartum depression. Our abs didn’t separate during our pregnancies. We were never pregnant!

“Oh, look,” I said to my wife, finally able to point out a dad in one of the magazines. “It’s a dad. He’s got the kids for a few hours and they’re covered in chocolate. He’s an emotional wreck and the house makes massive earthquake damage look like a little bit of debris in the streets. Turn the page and look: Mom’s back with the kids -- who are clean and happy -- and the house is immaculate. Life’s good again.”

“Here’s something,” she said. “A dad changing his kid’s diaper.”

I ripped the magazine out of her hands. “On a pool table? I’m not that irresponsible. I’d at least do it on the kitchen table.”

I kid you not -- the headline for the article was: “Dads can also have fun with their kids.”

“WHAT?” I felt like Lou Ferrigno as the Hulk. In a flash of anger, I tore the magazine to shreds. “Oh, I guess moms think most dads can’t have fun with their kids.” My son came into the room right about the time I was Lou Ferrigno-ing the magazine.

“No,” I said. “And I don’t want you ripping up any other magazines either.”

“Not according to these magazines.”

My wife told me that dads don’t read parenting magazines, which is why they’re geared toward moms.

“Then they should be called Mother Magazine or Mommy Monthly,” I said. “The word ‘parent’ refers to moms and dads.”

“You can still benefit from the information.”

“I sure can,” I said. Then, skipping through a magazine that was still in one piece, pointing to examples, I added, “But I don’t want to ‘know what makes me feel pretty.’ I don’t want to make sure I ‘get a girls’ night out.’ Oh, look -- here’s a bit on ‘making memories with your child.’ I see Mommy in the picture. Where the heck is Daddy?”

“Yeah, Mommy,” my son said, “what about Daddies? Daddies are parents, too, you know.”

“But I wanna complain, too, Daddy.” He grabbed a magazine and ripped it in half.

“No,” I yelled. I could see my picture in one of those parenting magazines -- a complaining dad and his copycat kid complaining, too. And the article: “Don’t let your husband negatively influence your child.” Now I was really feeling like a bad dad.

So I spent the next couple hours reading my remaining parenting magazine. Sure, I felt a bit feminine, especially when the articles kept referring to me as a woman. And I’ll admit I was afraid another man would catch me reading it and call me a “Mr. Mom.” But I learned a great deal.

Now I know what I must do to fit into that bathing suit by summer. I know what it takes to join those “Mommy and Me” clubs. I know which lipsticks last the longest for those busy Mommy-filled days. And I now know what to expect when menopause hits.