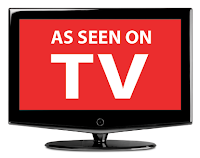 My son has toys, but he plays with cardboard boxes, scrap paper, wrapping paper tubes and recycled Christmas bows. If he were a toddler, I’d understand, but he’s 7.

“Imagination is healthy, Daddy,” my boy said to me while building a nondescript machine out of old juice boxes and Scotch tape. I couldn’t disagree with what he was saying, but with Christmas coming, my wife and I wanted to know if we should be buying him toys or digging through the trash to find him junk.

We asked him to make a list for Santa. He told us the best stuff is what he’s seen on TV. My wife and I simultaneously felt our bank account go negative.

If we had a normal kid, we’d be right to worry. That stuff advertised on TV is expensive. It’s all video game systems, remote controlled gadgets and popular TV show-themed toys. But we have our son, who plays with junk. He doesn’t want expensive name-brand toys. He wants the stuff you see for $19.99 plus shipping and handling, and not the toys either.

Our son likes the weird household items, like the boot and glove dryer he saw on TV a few days ago. The kid doesn’t even own boots or gloves.

“Maybe I should watch TV and see what other great stuff I can find,” my son suggested. “But all that TV wouldn’t be healthy, would it?” he asked. “I don’t want to be ruled by TV. Did you know American kids spend about 30 hours a week watching TV? When they’re 70, they’ll have spent up to 10 years of their lives watching TV. That’s bad.”

“Where’d you learn that?” I asked with surprise.

So my son set out to watch TV in search of “good” gift ideas for his Santa list. I sat with him and saw some really cool things advertised, like an actual flying saucer, a mini duck shooting gallery and a pretty neat mini magician’s magic set.

My son, however, had eyes for the Bug Vac (“It’s lightweight, Daddy, and it removes bugs with no mess.”), the Bed MadeEZ wedge (“Daddy, it’s designed by housekeepers from around the country.”) and the Twin Draft Guard (“Our drafty doors and windows are forcing us to crank up the heat, Dad. The Twin Draft Guard blocks air leaks from both sides”).

My son’s list grew with odd items. He couldn’t get enough. But he wanted more. He sat in front of the TV for days, collecting the names of weird items for his list.

Seven-year-olds think everything is just that easy. One day, when our son came home from a friend’s house -- a house that’s double the size of ours -- he asked if we could upgrade. “Can we get a bigger house? Just use your Chase card.” And after riding roller coasters at Magic Mountain another time, he asked if we could build a roller coaster of our own in the backyard. “Why can’t we build one, Daddy?” he asked. “You have wood in the garage.”

Yup, everything was an easy fix. But quitting TV was the kid’s first lesson in “easier said than done.” I caught him watching TV only minutes after he said he was finished with the tube.

He was perfectly in denial.

Then he went nuts. He hummed TV show themes nonstop and recited commercials word for word. My wife and I drew the line when he imitated kid pop star Justin Bieber, who he’d seen perform on TV.

A few days later, the TV gave our boy a way out. It advertised an “As Seen On TV” website. So I hooked the kid up to the Internet, with hopes it’d get him off TV. It seemed to work. And everything he ever wanted was there, even WonderFile, the ingenious organizer that turns any space into a neatly organized workplace.

A few clicks and a few hours later, my son’s Santa list was complete, and he’d forgotten all about TV. To celebrate, he asked if we could go outside to play.

“I’m so glad I don’t need TV anymore,” my son said while tossing a football. “But playing outside in this cold air doesn’t seem really healthy. Can I go inside and go online?”

And just like that, my wife and I have a true kid of the 21st century.