What's All This Hype? 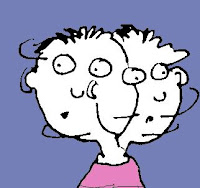 How does a 7-year-old know what “womanizing” is? My wife and I had been discussing a conversation I had with my brother who’d been bragging about how lucky he is to have a wife who cooks all the meals in the house. Indeed, my brother is lucky -- he can’t make toast. But my son decided to join in a conversation he had no business joining. He does that.

“That’s a problem,” my wife told me later.

My wife said I was in denial. I denied the accusation.

At school, our boy was getting in trouble for not minding his business, not staying in his seat and blurting out answers. We told him to mind his own business, stay in his seat and raise his hand and wait to be called on before answering any questions. And that was that. After all, the kid wasn’t trying to burn down the school. He was shouting out answers pertaining to the day’s lesson. Bad behavior could be a lot worse.

My wife said I was right. Then she had to think beyond that. “You think he has ADHD?” she asked.

“That’s something to consider,” I said, “if we were talking about someone else’s kid. But not our kid.”

To avoid an argument, I agreed that, as a precaution, we should look into ADHD. And then I went on with my day. I had no intention of looking into ADHD. There’s no way my son has ADHD. My wife and I didn’t do anything wrong as parents to give our kid ADHD. What was ADHD, anyway?

I looked it up online. ADHD is attention-deficit hyperactivity disorder. Symptoms include joining other people’s conversations, not being able to stay seated and blurting out answers. There it was right in front of me. My son had none of those problems.

My wife did her own research and, upon reading another bad report from our kid’s teacher about his hyper behavior in class, asked me to consider taking action.

“Okay, let’s settle this once and for all,” I said. I made an appointment with our son’s teacher. “I’m sick of teachers picking on our kid.”

At the meeting, the teacher talked about how much she adored our child, how he was the sweetest kid. Then she said she had to talk to him constantly about shouting out answers, minding his own business and settling down. She brought up a few other things that seemed to come right off the ADHD website I found, as if she was pushing us to think our kid had ADHD.

“Do you think he has ADHD?” my wife asked the teacher. She said she couldn’t give her opinion. Of course she couldn’t.

“That teacher just wants us to medicate our kid so she doesn’t have to do her job,” I told my wife after the meeting. “You wanna know what’s really going on here? All these signs we’re dissecting are really signs of our son’s leadership abilities. Think about it.”

I don’t think she thought about it. But in the days that followed, our son’s behavior in class improved. For the rest of the week, in fact, he got no bad reports. Maybe I was right. Maybe he was smarter than I thought, able to fix his behavior just like that.

Then we got the week’s end report saying our son had better behavior, but the teacher still had to give him visual cues to stop blurting out answers, to stay seated, etc. I can only assume that the teacher was putting in writing all the “facts” one would need to prove she did all she could to “help” our kid.

Facts or no facts, this was my son. I was concerned. I had to get real answers. I suggested to my wife that we take our son to see his doctor.

The doctor couldn’t tell us anything -- not yet, anyway. He gave us an evaluation to fill out and one for our son’s teacher to fill out.

Following the visit, we bought several books on ADHD, and each night, after long days at work and after putting our son to bed, my wife and I stayed up late reading our books and discussing our situation. We’ve barely slept in the last week.

We just got the teacher’s evaluation back and returned it to our son’s doctor. When we hear what the doctor has to say, I won’t be in denial. I’ll be ready to do whatever I have to do to help my son.