The Earth Shakes, the Seas Rise 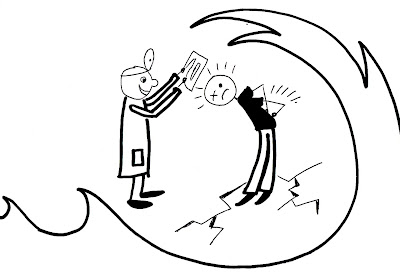 My 7-year-old son has been in lots of trouble lately. Discipline doesn’t help.

I dropped a 30-pound box of garage junk from a high shelf into my eyeball. There’s a big red blotch on my eye that feels like a sharp wooden splinter.

Oh, and a close relative just got cancer. It’s Stage 3.

To make matters worse, I injured my back and I can barely stand. The pain medication has made me extremely anxious, hyper and insensitive.

So someone tried to “cheer me up” with, “Stop whining, it could be worse.”

The aftereffects of my pain medication kicked in and I said insensitively, “Oh, so because it’s not worse, because my family isn’t living on the street, because we still have our limbs, I can’t get upset?”

And just when I thought things couldn’t get worse than they were, they got worse.

“Mike,” my wife called from the other side of the house. “Can you do me a favor?”

I thought about my answer long and hard. Half a second later, I said, “No, I can’t.”

Some people say that if two individuals stare into each other’s eyes for eight seconds or more without moving, they’re going to either kiss or kill one another. My wife and I didn’t kiss. After our 8-second stare, she threw down the gauntlet, challenging me to prove that I care about her needs and not just my own. Of course, this dilemma was bound to come up. I’d done something long ago to cause it. At the altar, I said, “I do.”

“I care about your needs,” I said in my defense. “I just have nothing else to give right now. This medicine is making me nuts and I’m wiped out and I’m drained.”

Clearly I was dramatic, too.

I retreated from what was slowly becoming a death match. My son tried to help.

“Daddy, maybe you should just take a cool bath and cool off.”

When I told my son that wouldn’t work, he asked if he could take a bath. He likes to take long baths because his skin shrivels up. He says the wrinkles make him look older, and he wants to look older. I told him that “older” isn’t better. “Older” means more problems.

My wife walked by and didn’t say a word -- the silent treatment. She called her parents and learned they both had the flu. She asked if they needed her help. Evidently they didn’t because my wife kept insisting that they did.

When she got off the phone, she asked if I was going to say sorry. Typical guy, I said, “Sorry for what?”

She didn’t say a word. She got back on the phone, this time with her sister, and she learned her sister was helping their parents with shopping and cooking while they were sick. My wife started crying.

“Why do you get to help and I don’t?” she asked her sister.

When that phone call ended, I went to my wife and said I was sorry for what I’d done. I asked if she was okay. Things were bad for my wife, too. I didn’t have to make matters worse.

And then matters got even worse. My wife reamed me for keeping our son in the bath too long -- he was all shriveled up. So, with my medicine making me more and more anxious and insensitive, I struck back at my wife, saying her parents didn’t want her help because her help always creates more work.

About an hour later, the house was quiet and still. My wife was in the bedroom avoiding me for what I’d said. I was in the living room avoiding responsibility for, coincidentally, what I’d said. Our son tried to help. He turned on the TV looking for something to cheer everyone up. He found news about the earthquakes and tsunamis in Japan. We all came together to watch.

Yes, things could be a lot worse. My wife and I never killed each other. We never were going to kill each other. We apologized and made up -- like we usually do. Japan’s epic problems made our simple domestic issues look like grains of sand, nothing to complain about.

A few days later, I cut my head open at work. While the doctor punched staples into my skull, I smiled, ignoring the pain. “Things could be a lot worse,” I said calmly.

Who am I kidding? I was furious. “God,” I yelled. “It just keeps getting better and better.”