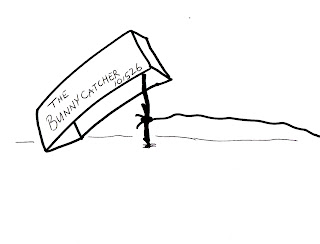 My 7-year-old son loves nature. He found a piece of hardened cement and asked me to look at his “shiny new rock.”

“This must be sedimentary rock,” I said, playing along.

“No,” the boy said, strapping on his junior scientist goggles. “It’s igneous.” He studied the cement more closely. “Daddy, do you think I’m a scientist because of how I discover enchanting stuff in nature?”

“Sure,” I said. Hey, if a piece of cement makes my son that happy, I have to go along.

Now the kid wants to discover everything in nature -- weeds, bugs, different shades of dirt. His latest challenge is to catch the Easter Bunny for scientific examination.

“Daddy,” he said, “did you ever catch the Easter Bunny when you were a scientist my age?”

“Sure,” I said, still going along.

Then came my big mistake: “My brother and I caught him in a box and we saw him disappear.”

“You saw him disappear?” he said.

And so began our scientific adventure. We took out the leprechaun trap we used on St. Patrick’s Day (that’s another story) and painted over the green with pastel colors for Easter.

“You remembered the item number for a TV at Walmart?”

“Yeah, in case I ever needed a long number for one of my inventions.”

Next, my son and I hid behind a tree and watched the Bunny Catcher 101526 for activity.

“Daddy,” my son said, “I’m starting to feel like there’s no Easter Bunny. We’ve been here all this time and where is he?”

We’d only been waiting five minutes.

We went inside the house for an Oreo cookie break. My son was defeated.

“Remember, he’s the one who got his finger smashed in the door when I was in kindergarten?”

“Well there’s your answer right there,” I said. “Anyone who’d stick his finger into a closing door obviously doesn’t know much.”

“Yeah, well maybe he knows about the Easter Bunny.”

It was time to tell my son the truth.

“Okay,” I began. “My brother and I never caught the Easter Bunny, and we never saw him disappear.”

My son’s smile returned. Then he said, “You know, Daddy, Easter isn’t just about the Bunny and eggs. It’s about Jesus rising out of the ground on Easter Sunday. His resurrection each year is our hope for an eternal life in God’s presence.”

“I saw it on a card at Walmart,” he said. “Cookie break’s over, Daddy.” Then the kid strapped on his junior scientist goggles and grabbed a shovel. Now he wants to discover Christ rising out of the ground in our backyard on Easter Sunday.