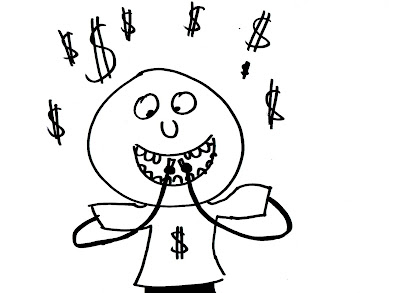 My 7-year-old son’s teeth were loose. All he cared about was the money he’d get when the teeth came out.

“Money isn’t everything,” my wife and I told the kid. I felt his teeth -- they weren’t coming out any time soon. Thank God! The Tooth Fairy couldn’t afford a dollar, let alone two. The winged tooth-snatcher was off the hook for at least two months.

Three months later, our son’s teeth were ready to come out. Three months was more than enough time for the Tooth Fairy to round up some dough.

“What the heck is the Fairy gonna do?” I asked my wife after feeling my son’s looser than loose teeth.

“How should I know? With all the furlough days she’s getting this year, there’s no extra money, not even two bucks.”

“Mommy, Daddy,” our kid said. No way he overheard our conversation. “If the Tooth Fairy can’t afford to give me money for my teeth, can you give me money?”

My wife and I looked at each other. There was only one answer we could give the kid.

“Don’t you worry, you’ll get a dollar a tooth just like every other kid in the world.”

Our kid leaped for joy, ran to the bathroom and started yanking on his teeth.

The kid had already pulled out a tooth.

“But you could ruin your gums forev—”

There went the second tooth.

“That was easy,” the kid said. “Look, Mommy,” he yelled, running out into the living room with blood pouring from his mouth like a vampire who just preyed upon some helpless victim.

“Mrraaaahhhh!” my wife yelled when she saw the blood. She didn’t mind that it went all over the carpet like I was yelling about. She almost made it to the ER with the kid.

Meanwhile, I had the Resolve and a carpet brush trying to get the blood out of our white carpet. “Look what you did,” I said. “This’ll never come out.”

“Carpet isn’t everything,” our son said.

“No, but money is,” I replied. “And we can’t afford new carpet right now.”

That night our boy called various family members, including Grandpa and Grandma in Northern California, to tell them about his two front teeth.

“Oh boy,” Grandpa said over the phone. “Did you know the Tooth Fairy is giving out twenty-dollar bills and video games this year? She might even give you that baseball glove you really want.” Grandpa made sure our boy told us how gracious the Tooth Fairy was going to be that night, all the while laughing at what he thought was a “funny joke.”

“Ha ha,” I told Grandpa when I got on the phone. “So we’ll be expecting the Tooth Fairy from Sacramento tonight?”

“Oh no,” he said. “That Tooth Fairy passed the torch many years ago.”

Our son put his teeth in an envelope and shoved it under his pillow before saying good night.

“Can you believe the Tooth Fairy is giving away all that stuff this year?” our boy said as my wife and I tucked him in. “I hope she gives me a twenty-dollar bill. That’d be the best.” He was so excited.

My wife and I said good night to our boy, then trudged into our room to call it a night as well, unsure of what the Tooth Fairy would give our son for his two front teeth.

“But he wants that twenty bucks so bad.”

“Money isn’t everything,” I said.

The next morning, my wife and I heard our son moving. He was awake. We heard him go under his pillow and rip open the envelope he’d put his teeth in the night before. We waited to hear the disappointment.

There was no response that we could make out. We remained in bed and listened for clues. We heard him moving around the room: rustling paper, scissors at work, tape being pulled from his Scotch tape dispenser on his desk.

Then we heard tapping on our door, which was only slightly ajar.

“Mommy, Daddy,” his little voice crept in. He slipped into the room with his hands behind his back. He came to our bed and handed us a folded-up, taped-up piece of paper. My wife and I sat up, opened the paper. Inside it read, “I love you Mommy and Daddy. This is for all that you do for me.” Taped below his writing were the two dollars he’d received from the Tooth Fairy.

My wife and I smiled ear to ear. Our son gave us a smile of his own, a big hole in the front where teeth used to be.

Love the drawing. Perfect for this column. Also love the image of blood going everywhere and everyone reacting differently.

I love your own publish. It's great to determine a person explain in words in the center as well as clearness about this essential topic could be very easily noticed.
instagram viewer