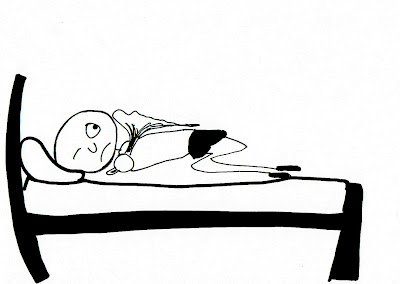 I’m having one of those days. One more problem will put me over the edge. It’s so bad I’m just looking for a reason to explode.

My wife does it. She pulls the covers off me like she does every night.

Fact: Wives always steal the covers. Why do wives do that?

So I take the covers back. I really wanna yank the covers from my wife so hard that I fling her out of bed onto the floor. But she looks so sweet asleep, so peaceful.

I gently pull the covers back so as not to wake her.

She tugs the covers back to her side.

I won’t get mad. I slowly pull the covers back.

Tug.
I still won’t get mad. I pull the covers back to my side again.

Tug.
Okay, if she tugs them again-

Tug.
One more time and then I’ll really explode.

Tug.
Okay, this is the last time.

Tug.
Now she has no more chances.

Tug.
This is really her final-

Tug.
I’m not fooling around here.

Tug.
Try it again and see what happens.

Tug.
Idea: What if I make a covers holder? I’ll call it the Covers Holder. It’ll hold the covers on my side of the bed. Stupid, right? Not really, if you think about it. How much sleep is lost trying to regain the covers each night. Men all over the world would benefit from such a contraption to hold the covers on their side of the bed when their wives try to pull them to their side, and they’ll get the sleep they so desire and so deserve. Yup, beginning tonight, my wife will no longer get my covers.

I go to the garage. I’m stealthy (it’s 2 in the morning). I gather some hooks and hoops, ropes and rods, clamps and clasps, and a big screw, and I build a mock-up Covers Holder on my workbench.

Now I gotta move it inside. It’s an amazing piece of craftsmanship. It would make Sears proud to see how I used my tools tonight. It won’t fit through the door.

I take it apart and reassemble it in the bedroom without waking my wife.

It’s 5 a.m. I just fell asleep. She finally gives the covers a tug. The Covers Holder works great. It holds the covers no problem.

Problem: The covers are now strangling me. I can’t breathe. I feel my eyeballs bulging out of my head.

I yank the covers back to my side. My wife glides into the air. She lands on my stomach, knocks the wind out of me.

I can’t speak. I can’t breathe.

“What are you doing?” my wife asks as I gasp for air.

“I was trying (gasp) to (gasp) take the covers back (gasp) in the name of husbands (gasp) all over the world.”

“That’s because you have covers on your side of the bed,” I say in one breath, and then I suck in for the air I can’t seem to get.

“Oh my God, you’re still talking about the covers.” My wife is back to sleep as she finishes her sentence.

I try to fix my Covers Holder. I’m tightening the last screw. My wife yanks the covers to her side of the bed. My Covers Holder blows apart.

Before I can sling the pieces of my contraption through the window, I hear a sound. It’s almost like chanting. It is chanting. It’s men around the world rooting me on to stand strong, not to give up.

I don’t give up. I get up. I turn on the lights. I bang away at my Covers Holder. I ignore my wife when she tells me to shhhhh.

I finally get my Covers Holder together and it works. It’s awesome. And now that it’s a success, I speak to husbands of the world to unite. Let’s kick this covers insurgence into high gear right now.


Question: How many wives out there are really going to let us attach this monstrous apparatus to the bed and keep it there?