The Girl, The Date, The Dilemma 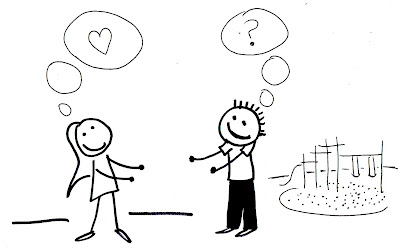 It’d been a year since my son, now 8 years old, met The Girl. The Girl’s a year younger. This was their first play date since their first meeting.

“Do you remember her?” I asked my son.

“You met her last year,” I said. “At this park. Her dad and I went to school together in San Francisco.”

“I already know all that, Daddy,” my son said to me, annoyed that I was filling him in with details when he just told me he remembered her.

“Do you remember her name?” I asked.

I waited for him to say her name. When it was clear he had no intention of responding, I said, “So, what’s her name?”

My son blew me off, ran to the playground. The Girl followed.

“Evidently,” I told my friend, “knowing each other’s name isn’t grounds for being friends in the kid world.”

I called for my son.

“It’s okay,” my friend said, probably embarrassed to be a part of this scene.

“Yeah, but I asked him a question and he just blew me off. That’s not okay.”

I called for my son again, this time using that fatherly voice that meant business. He’d come to me if he heard that voice.

My son just kept playing. I called again -- because I couldn’t back down now. Luckily my son came over -- I had no alternate strategy to show I held the power otherwise.

“Yeah?” he asked, as if I was inconveniencing him by calling him over.

“I asked you a question and you just ran off. That’s rude.”

“What was the question again? I forgot.”

“I asked if you remembered her name.”

“It’s really okay if he forgot,” my friend said, trying to end this whole thing.

“Yeah, Daddy,” my son said with pure teenager in his voice. “I have to do stuff.” Then he turned and ran back to the playground, my friend’s daughter in tow.

I could’ve let the whole thing end there. But there were principles at stake. My son stepped over a line. So I stepped over that line after him. My friend followed, not because he was supporting me, but because he’d look kind of awkward standing on the outskirts of the playground alone.

I took my kid by the hand and walked him to a nearby park bench, sat him down.

“I asked you a question twice and you ignored me. And then you were rude. That’s rude.”

“Sorry, Daddy,” my son said, no longer putting on the tough guy persona.

“You’ve been doing this a lot lately. You repeatedly misbehave around other people to try and show off or something, and then you just want it all to be okay afterward because you say you’re sorry. It’s good to say you’re sorry, but you have to start thinking before you act. Then you won’t have to say sorry.”

“Then why’d you lie and say you did?”

“You’re not gonna get in trouble for forgetting someone’s name,” I said. I looked at my kid. He seemed to feel awful about the whole matter. So I dropped it. “Okay,” I said. “You can go play.”

My son rejoined The Girl at the playground. I rejoined my friend. We stood there, quiet for some time, watching our kids play. I finally said, “He was embarrassed that he forgot your daughter’s name. Silly, isn’t it?”

Then I asked, “What’s her name again?”