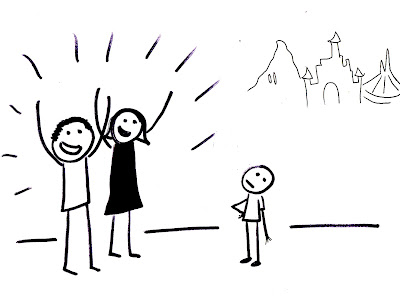 Halloween is all about surprises -- scares, tricks, treats. This year’s surprise was Disneyland.

My 8-year-old son had no choice -- at birth, he was forced into our family. He wouldn’t get the news of going to Disneyland in advance like his friends got. No, he was going to find out upon arrival after a long, drawn-out production of a lie.

But here was the problem: Today’s kids are no dummies. When I was young, my parents could rely on my gullibility to trick me into believing anything. My son is far too skeptical for that, and so my set-up for the Disneyland surprise had to be even more elaborate than I envisioned.

Earlier this month, my wife ordered the Disneyland tickets online. Meanwhile, I outlined a script that she and I would follow in order to trick our son into the surprise. My spouse had long ago given in to my madness. Like most everything else I do, she just went along.

“Let’s just tell him now,” she said full of her own excitement.

“Can’t you just go along with me this one time?” I asked. It was Halloween time, after all, and Disneyland had to be a surprise.

We kept the secret for over a week. On the day before we were to go, we told the kid that, the next day, we’d have to go down to Orange County (where Disneyland lives) to help Grandpa (he lives in Orange County, too) run some errands. This was believable because we’d done it in the past.

The kid went right along with the story.

When he fell asleep that night, my computer called me from the other room. It seemed to know we were going to Disneyland, and it begged me to go online and check out the cool stuff planned for the Disney Halloween spooktacular. My wife wrote off the whole computer calling me thing as if I was making it up. Whatever.

Online, I saw how Disney dressed up the Haunted Mansion to look like the movie “Nightmare Before Christmas.” Space Mountain became haunted with a ghost that chases roller coaster riders through space. There’d be pumpkin carvers, a Halloween Tree (from the classic Ray Bradbury book of the same name), jack-o’-lanterns galore and trick-or-treating. Forget my son’s excitement -- I couldn’t wait.

On the day of the big surprise, we woke -- rather I woke and shook my wife awake -- ran into the kid’s room and woke him up, yelling, “Hurry up, get up, it’s time help Grandpa with all his errands!”

In the car, my wife and I recited the lines of my surprise script, telling our kid how we were all going to have to be patient because we had “a lot of boring shopping to do with Grandpa.” I told the boy that if he behaved well, we’d check out the Halloween store in the mall.

“Wouldn’t it be great,” I asked, veering off the script I’d written, “if they had a ‘Nightmare Before Christmas’ costume?”

My wife shot me a look, assuming I’d given away the surprise. No way -- our son had no clue.

“Check out that Disneyland billboard,” I said to my son about halfway into the drive. “Oh wow, it looks like they decorate for Halloween. I sure wish we could go.”

Again, my wife glared at me. Really? I knew what I was doing, even with my ad-libbing. Our son had no idea what was in store for him.

When we neared Disneyland, I really got into character, and I showed the world -- well, everyone in the car anyway -- that Al Pacino isn’t the only one with acting chops.

“Is this right?” I said, tapping the electronic gas gauge on my dash. “It says we need gas. I think I’m going to pull off here. Let me know if anyone sees a gas station.”

The kid totally bought my act. I took the exit before Disneyland so he wouldn’t get suspicious. I’d take back streets to the park.

“There’s a gas station,” the kid said when he saw one.

“Not Shell,” I said. “See if you can find a Chevron. I wanna put gas with Techron into my tank.”

When we got to the Disneyland parking garage, I was turning in an Oscar-worthy performance.

“What the heck?” I said. “I must’ve made a wrong turn somewhere. Where the heck are we?”

My wife turned toward our child in the back seat so she wouldn’t miss his excitement when he finally discovered where we were.

“Daddy,” he said, “we’re at Disneyland.” Now I turned around so I wouldn’t miss his excitement. But he wasn’t excited. He was annoyed.

“You gotta turn around, Dad,” he said. “There’s no Chevron in the Disneyland parking lot.”

Yup, Halloween is all about surprises. The surprise that day, however, was on my wife and me. Even as we were boarding our doom buggy in the Haunted Mansion ride, our kid was asking, “So we’re not helping Grandpa run errands today?”

Happy Halloween. Here’s to your Halloween surprise -- or lack thereof.

Just read this, at least it was a good production, I was entertained.

I've been to Disney for how many time but haven't experience their Halloween special yet hopefully this year.. Disney Vacation

I'm 35 years old and have been going to Disneyland one to three and even sometimes four times a year since I was 4 years old, and I'd never been to the park during Halloween time (my favorite time of year) until this year. The park doesn't do a major overhaul like Knott's does at Halloween time (other than with the Haunted Mansion and Space Mountain), but it's still really great. It's very family friendly. I wish they'd do more to the rides, though I could see how it'd be tough to do that.