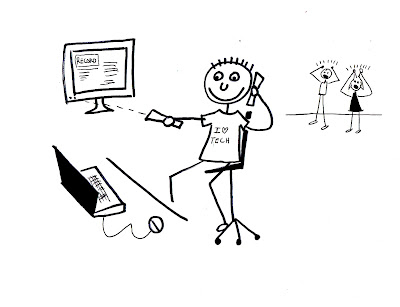 What age are your children when you let them use your computer? How about your iPhone to play games? And the DVR to record programs on TV -- when should your kids be allowed to use that?

How old are your kids before you let them use these electronic items unsupervised?

My wife and I have an 8-year-old boy. He’s used the computer and our phones many times. But each time we’re hovering over his every move -- we don’t want him accidentally deleting something important or messing everything up.

My step-dad told me that my wife and I are typical only-child parents, that we suffocate our kid, give him no room to grow and mature.

“He has to take ownership of his mistakes,” he told me. “It’s key to character building.”

Later my son asked if he could play a game on my iPhone while I washed the car. My first thoughts: What if he drops the phone when I’m not looking? What if he deletes something? What if he scrambles up the placement of my apps? Those took me hours to organize.

I could hear my step-dad’s voice from earlier, warning me to give my son responsibility, to let him take ownership if he makes a mistake.

I gave my boy my phone and told him to be careful. And I turned my back.

When I got the phone back, it actually looked okay. My son even asked me if the phone looked like it did when I gave it to him. I told him it did. Wow, maybe this experience was really teaching the kid to be responsible.

“Can I use the computer next?” he asked. My first thoughts: The iPhone is one thing. The computer has so many things he can screw up when I’m not looking, more important things like system preferences, our checkbook, and the order I have applications placed on my dock.

But there was my step-dad’s voice again, telling me to let the kid take ownership.

I got the kid set up on the computer and told him to be careful. And I turned my back.

When he was finished an hour or so later, I checked out the machine. What the heck? Nothing was totally destroyed.

So I taught him how to use the DVR, gave him full reign of our electronics in the house. I’m gonna get an award for being the best parent, teaching my kid responsibility so early on.

And then came the problems. My wife found 20 new “Words With Friends” games started with unknown people on her phone. We got over $30 in receipts from iTunes showing purchases neither of us had made for applications like “Icee Maker,” “Cake Decorator” and some werewolf hunter game that made no sense.

The DVR had no more space available to record. But the memory wasn’t taken up by cartoons or other kids shows. It was full of game shows like “Jeopardy,” “Wheel of Fortune” and “Family Feud.” That’s our son.

Then I found the real problem. I checked the computer and discovered missing application icons on the dock. Worse, the icons that were there were in the incorrect order.

My wife and I discussed taking away the kid’s electronics privileges. Obviously he couldn’t be trusted.

“I’m so sorry I messed everything up,” our son said, taking full ownership. “I didn’t know I was starting new ‘Words With Friends’ games with people you don’t know. And when I was playing this game on your phone, this ‘Icee Maker’ window kept popping up and I just pressed okay to try to get rid of it.”

In his defense, some of those free apps do allow tricky pop-up windows that could easily lead to accidental purchases. Even I’ve almost done that. As for the missing application icons on the computer dock and the rearrangement of the present icons, my wife wrecks that stuff all the time.

When I was a kid, my step-dad taught me how to work on cars. He didn’t just show and tell. He told me how to do the work and I did it. While working on a carburetor one time, I actually broke something very costly. I feared for my life.

But my step-dad wasn’t upset. The cost to replace the broken part wasn’t as valuable as the experience he was giving me, and the ownership he was teaching me to take.

Likewise, my wife and I didn’t take our son’s electronics privileges away. We pointed out the mistakes he’d made and showed him how to avoid them in the future. And we told him we weren’t upset about his mistakes. We taught him to own up, that not owning up was far worse than making the mistake.

Last week, FedEx showed up at our door with one of those Roomba vacuuming robots. Our son wasn’t taking ownership of that one. But my wife and I sure did. It cost us over $200 plus shipping and handling to own that thing.

And that’s the story of how our carpets came to be vacuumed automatically on a daily basis.

I enjoyed reading your posst