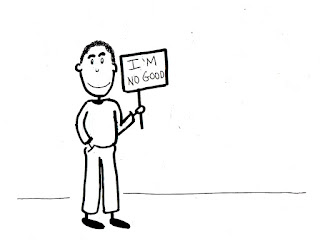 If you can’t say something nice, don’t say it at all.
We’ve all heard that saying a million times, yet people say the darnedest things.

I’ve hated my curly hair since I was a kid. It’s nappy and grows all over the place. There’s not much I can do with it. I try to keep it short. But it grows fast -- and big.

When it’s long, people like to remind me to cut it. “Your hair’s getting nappy,” they say. When I cut it, other people tell me to let it grow.

“Yo gangsta,” they say mockingly in bad imitation. “Where’re yo Dickies pants and black Nike Cortez shoes to go along with that gangsta haircut?”

I can’t win. How about I just become another person?

The other day, a co-worker asked me about the film school I spent so much money on and what it was like to be a failed director. Who says that kind of thing to your face? And how do you respond to that? Do you strike back? Or do you follow your conscience: If you can’t say something nice, don’t say it at all.

“Okay,” I said, “so I’m a failed movie director -- true. But you have to fail early in life before you can succeed later. That’s what I’m doing right now.” My co-worker was quick to shoot that down with a quote from author F. Scott Fitzgerald: “There are no second acts in American lives.”

F. Scott Fitzgerald said it, which can only mean one thing: It must be true -- I’m doomed to be a failure.

But, thanks to an instant Internet search on my smart phone, I discovered that Raymond Chandler turned writer at age 45, Paul Gauguin was 43 when he became a painter, Martha Stewart was originally a caterer before becoming -- much later in life -- the superstar business magnate she is today, and Ray Croc was 52 years old, selling milkshake machines when he set out to build the McDonald’s brand.

My co-worker’s not-so-nice comments actually led me to something inspiring. I wondered where I could get more painful criticisms.

I turned to my good friends. We met at a coffee shop for some sandwiches and hard truths. I got a healthy serving of both.

Right away my friends told me to get a haircut. Then came the juicy stuff: At 35 years old, I’m not making enough money, my house is a shack, and I’m a terrible parent because I’m leaving my 8-year-old son an only child.

Well, my wife and I physically can’t have another kid. But that’s beside the point. Thanks to another quick Internet search on my smart phone, I discovered that my wife and I are really good parents for only having one child. The world has shown us many incredible only-children, including Franklin Roosevelt, Frank Sinatra, Elvis Presley, Cary Grant and John Lennon. Those are just a few recognizable names.

“How else do I suck?” I asked my friends as I wolfed down my BLT. With my smart phone nearby, I was hungry for more truth. My friends dished it out. But they served more than I could chew. Even my phone choked.

In the end, I came to the conclusion that I just suck. I suck at my job. I suck as a dad. I suck as a husband. Sure, I’m lucky to have a great wife and a great kid. I live in a great area. But my friends convinced me that those great things are there to help me see how much I truly suck.

As the awareness of my suckiness sank in, I came to realize something cool. Without digging, I unearthed a positive aspect of sucking: If I suck at everything, then I don’t have to be good at anything.

So I took advantage of my suckiness. When the bill for our sandwiches arrived, I informed my good friends that they’d have to pay my portion. “Sorry,” I said. “I have no money. I know -- I suck.”

A few days later, my wife nagged me about my sucky driving. I pulled over and let her drive. My son said I wasn’t being fair. I told him, “I suck, don’t I? When we get home, you can clean your room.”

That brings me to a recent piece of sucky writing I shoved in front of my wife for an honest opinion. I wrote the piece, so I knew it sucked. And I knew I couldn’t fix it. Because I suck. But I showed my wife anyway, maybe just as one last proof to confirm that I do, in fact, suck.

Finally, someone had something good to say about me, something nice, which, really, could only mean one thing: My wife was lying.