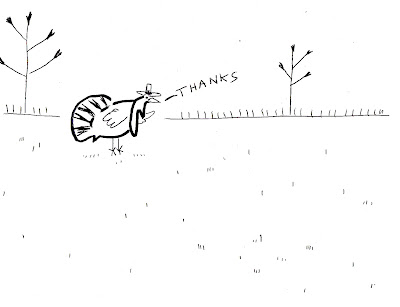 Thanksgiving is a day to give thanks.

So when my wife’s aunt and uncle invited us to their home for Thanksgiving a second year in a row, we should’ve said thanks but no thanks. Instead, my wife agreed to go.

Then I felt guilty.

“But they had us over last year,” I said. “We should be inviting them over this year.”

I believe that if a friend treats you to coffee, you should treat him to coffee next time. I can’t see abusing another person’s giving nature. A gift must be returned.

“We’re in no position to host Thanksgiving this year,” my wife said. “And my aunt and uncle aren’t like that. A return gift isn’t necessary. Our thankfulness is plenty.”

Maybe my wife was right. Maybe the gift doesn’t have to be returned. Maybe saying thanks is enough.

As a result of that revelation, I spent the month of November saying thanks and not feeling in debt to anyone who gave me something or did something for me. If people performed such a kind gesture, I thanked them. That was it.

My mom, who writes thank-you letters for thank-you letters, thought I was nuts. Typically, we’d be spending Thanksgiving with her this year at her home in Northern California since we spent last year with my wife’s family in Southern California -- we alternate from year to year. But my mom made plans to be out of town this Thanksgiving, so we’ll be in the southland for 2011.

“You’re going over to her aunt and uncle’s again?” my mom said. “Michael, you should be having them over this year. You have to return the gift.”

“A return gift isn’t necessary, Mom,” I said with my new outlook on life. “Our thankfulness is plenty.”

I went on behaving with that mentality.

Last month, when my wife and I celebrated our 11th wedding anniversary, a friend from work bought us a present. This month, that same friend celebrated his wedding anniversary. I felt no obligation to return the gift. I just congratulated him on five years. (I never thought outsiders should give gifts to those celebrating their anniversary anyway.)

“Thanks.” That was it. I felt no guilt to return the gift.

But then I felt guilty for not feeling guilty about returning the gift. Worse, my wife was getting complaints from friends and family saying I was ungrateful.

“But I said thanks.”

Everyone who had done something for me this month had cut me off. I was dead to them.

I thought maybe I could give return gifts to redeem myself. But either it was too late or I couldn’t financially afford to return the gifts.

“I told you,” my mom said when I called for advice. “You can’t accept anything else.”

That was it -- I wouldn’t accept anything else.

But no one was offering anything else.

So I say here and now, thanks to all my friends and family for just being there. I don’t need anything else. I’m thankful for what I have. I’m thankful for the people in my life, for my community, for the roof over my head, for the food on my table.

Wow, that’s what Thanksgiving is really all about, isn’t it? It’s about giving thanks for what we already have.

Now who’s gonna give the thanks back?