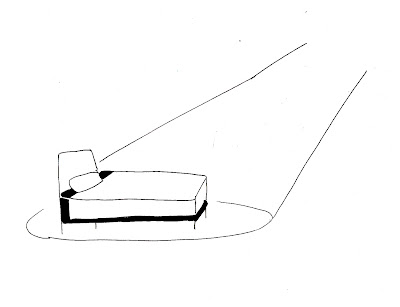 My 8-year-old son has to make his bed every morning. There’s a problem, though. Let me explain.

He keeps his bed made at all times, even when he sleeps. One night before bedtime, I pulled his covers down for him while he put on his pajamas, and then I went to brush my teeth. When I came back to say good night, he had the covers back on the bed and was putting finishing touches on his hospital corners.

“I just wanted to see how I’m gonna make it in the morning,” he said.

But that was a lie. As it turns out, my son would wait for me to leave the room, and then he’d get up and make the bed, and just sleep on top of the covers.

He had his bed made a different way every day. He’d arrange blankets, pillows, toys and stuffed animals in various fashions -- his bed was quite the display, I assure you. It gets even more complicated.
I think I have a right to be concerned when, watching an action movie where two guys are fighting head to head, my son says, “The bed in that room was so nice a few minutes ago. Now it’s all messed up.” He didn’t notice the awesome karate moves over a dining room table or the smashing hard hits, just the “amazing bed presentation” that was disturbed by two reckless men who were mad at each other.

I asked why he was so obsessed with neat beds. He said I made him that way.

I wasn’t buying that. No way.

Yet, if you accused me of doing something I didn’t do, I’d eventually think I did it. That’s how I’m wired. In due course I began to explore how it was that I, in fact, made my son into a kid who was obsessed with making his bed, who wouldn’t get under the covers when it was time to go to sleep.

Now I can easily point out what other people are doing wrong. But I couldn’t see so much in the mirror. So I went to my wife -- wives are good at shining a light on their husband’s shortcomings.

“You used to complain about him not making his bed all the time,” she said.

“Your point?” I asked. “Every parent does that.”

“But then you turned it into a game,” she replied.

She was right. I made it fun. The rules of the game: Whichever player could make his bed the fastest would win. Players could receive bonus points for added touches to the bed, hence the various blankets, pillows, toys and stuffed animals my kid added to his arrangements.

Early on, I intentionally won the games so my son would try harder -- he was more worried about speed than quality. After a few days, I couldn’t prevail if I tried. My son’s bed was always made before mine, and it looked much better.

But therein lies the problem. In order to win, he had to keep his bed made at all times. He’d freeze at night sleeping on top of his covers. Then, in the morning, he’d just spend a moment adding a few touches. And while I felt more secure about losing to an 8-year-old, I had to end the game.

It was too late, however. My son couldn’t change his behavior. He had to keep his bed made and as done up as ever, and he had to sleep on top of the covers. I asked various professionals for advice. They told me there was nothing I could do -- my kid would always be an obsessive bed maker, unable to crawl under the sheets for the rest of his life.

There it was. I’d ruined my son.

One night, while I was trying to get a snow jacket on my sleeping kid, my wife came in and delivered one of those monologues that come toward the end of movies, the ones that encourage the hero to pick himself up and finish the fight. Those monologues, backed up by sweeping musical accompaniments, are always so cheesy and unbelievable. But my wife’s was so magical.

The next morning, I went into my kid’s room ready for battle. He didn’t even know what hit him. Remember those scenes in prison films where the guards “tossed” one of the inmate’s cells to find escape tools or other contraband? Picture that. I tossed my son’s bed with him on it. He and his blankets and toys and stuffed animals flew into the air.

I created a new game -- the Who-Can-Keep-The-Messiest-Bed game. My son became a master of that one, too. I’m proud to say he’s sleeping under the covers again. Yes!

Only problem: Even after he wins the game, I can’t get him to make his bed to save my life.