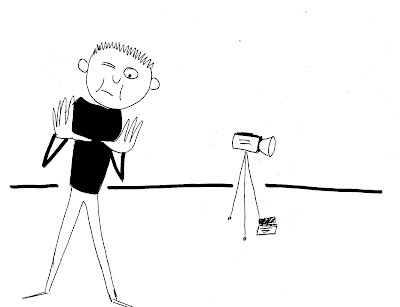 I’m sometimes accused of trying to give my kid everything he wants.

I know that’s a bad idea because as much as I want to make him happy, I don’t want him growing up thinking life will treat him the same way. I want to give him the skills and preparation he needs for the real world.

So when my son, now 8 years old, asked to make a movie like the kind we watch in the theater, I initially wanted to say yes to make him happy. But because I went to film school, made movies and worked in the film industry, I said no. None of it is magic. The real world of the movies is heartache, pain and mostly failure.

Then I considered what was best for the kid. Heartache, pain and failure would all come along soon enough. I figured it’d be better for him to deal with letdown at a young age than be blindsided by it when he’s older and the stakes are higher.

My son and I immediately went into production on the movie, using the family video camera and the movie editing software on the family computer.

Right away the kid and the movie didn’t get along. Making movies takes time, and my son can’t sit through the blink of an eye. But soon after realizing the workload he was in for, he quickly regained focus and plodded forward.

My son wanted his movie to have car chases, explosions and big monsters like in the films we watched in the theater. I knew the toy cars we pushed through the camera frame and the generic computer-generated explosions we applied via the editing program and the Halloween masks we wore were no match for the millions of dollars spent on the blockbusters my kid wanted to imitate. I just knew he’d be let down in the end, and it was going to hurt. But it was going to be good for him, right?

As we reached the end of post-production, my son was extremely proud and happy with the work we were doing. He was having a great time, too.

I think every filmmaker experiences such disillusionment. In other words -- it’s always too good to be true.

As we watched the first cut of the movie, I could almost taste the heartache to come. Friends and family would especially suffer through the 20-minute opus. I wouldn’t be able to deal with the pain my son would soon experience. I kept telling myself that my son’s pain now was better than his pain later.

But the kid loved his movie. It was everything he hoped it would be . . . and more. Now he wanted everyone else to take the ride.

I couldn’t deny him the opportunity. So I gathered family and friends while he set up a movie theater in his room. I made popcorn. He cleared off his bookshelf to make a snack stand. I lined up the people outside his door. He ushered them into his theater, which even had aisles and seat numbers.

Before the start of the picture, my son instructed everyone to “please silence your cell phones.” Then he dimmed the lights and “rolled film.”

Everyone was very impressed with my kid’s directorial debut and fed his ego respectively. As a result, the up-and-coming Spielberg wanted to make DVDs so he could sell them to strangers on the street. “You know, like how kids sell lemonade,” he said.

I had to set my son straight. He made a great little video for his age, doing the best he could with the resources at hand, but no one but family was really going to buy it. I couldn’t say anything, though. I didn’t want to be the bearer of bad news. But the look on my face said it all.

“Daddy,” my son said, “I know it’s not like a movie in the store. But maybe people will want to support a kid and his art.”

I didn’t have to protect my kid after all. He wasn’t under any false illusions -- ever. He knew exactly what he’d made and he just wanted people to see it for what it was. I was so glad I didn’t have to let him down.

And then he asked how we could get his movie nominated for an Academy Award.