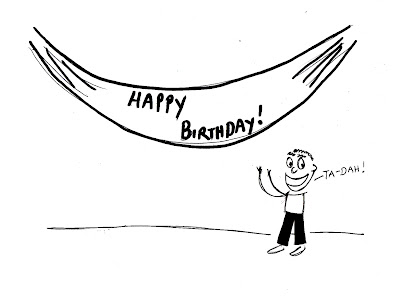 In the beginning of a relationship, men treat their women way too well for their birthdays.

It’s not that women don’t deserve to be treated well. Rather, men can never top what they did during those early days of dating, and after a number of years of marriage -- if it gets to that point -- women will hold us husbands to the untoppable standards that, unbeknownst to us, we set for ourselves.

I remember the puppy love stage: I showered my wife with expensive gifts, pages of heartfelt prose, big surprises and uncompromising attention. But as I got older and more domesticated, I found I no longer had excess money for expensive gifts, there were only so many ways to write I love you, my wife learned all my tricks and so there was no way to surprise her, and I just couldn’t give her the same attention because so many other things robbed me of my energy and focus.

But that doesn’t mean I didn’t love my wife. I adore my wife and I always have.

Last year at this time (my wife’s birthday pre-season), I thought about what I was going to do to celebrate the day she was born. She’d seen the decline of my gestures for her birthday after the first two years of marriage. And she saw right through my leveling-off period where I did no more and no less than the year before, a standard I could comfortably meet from year to year.

I can’t do the same yet again, I thought. That’d be as bad as doing less, especially at this point.

For five years straight, I prepared the same birthday meal, invited the same people over, bought basically the same gift, and I gave the exact same birthday card (I’d purchased 15 copies of the same card one year). I strategically designed her birthdays so she could never say the previous one was better.

But to cross the five-year mark and repeat that same routine for a sixth year in a row seemed, well, tacky. This was my wife, after all, not a job, and I wanted her to feel appreciated on her birthday.

I took my chances anyway. I bought everything I needed for the usual birthday meal. I sent invitations to the usual crowd. I got the status quo gift. Dug out that winning birthday card. It was all the same. And then, on the eve before her birthday, there was something different.

I ate dinner the same time I eat it every night -- around 6. Closed up the house -- shut the blinds, locked the doors. Got ready for bed -- brushed my teeth, watched a few scenes from a favorite movie, made sure I had the sheets just right. I kissed the wife goodnight and shut my eyes.

Then, for the first time in my life, I saw a ghost. Either that or it was a dream. The ghost was a younger version of me (much younger), dressed like a Dickens ghost, and he criticized me for doing the same thing on my wife’s birthday for a sixth year in a row. For an entity that could magically appear and whip up a Dickens costume in no time with no money, I could understand why he thought I could so easily just “go bigger,” as he told me I must do, too.

That ghost me didn’t care about reason and logistics.

“What happened to your enthusiasm?” the young spirit kept telling me. “You’ve got to surprise your wife with breakfast in bed, lay out her clothes while she’s in the shower, put a love poem in the front seat of her car, hang a birthday banner from a freeway overpass she drives under on the way to work --”

“That’s impossible,” I interrupted. And it was. I couldn’t pick out her clothes. I’m a guy.

I tried some karate moves on ghost me in an attempt to get rid of him, but he knew the moves better than I did since he was younger and closer in time to those lessons I took as a kid. Ghost me swept my legs and I hit the floor hard. My words were my only defense at that point.

“I can’t top what we did in those early days,” I whimpered. “I outdid ourself. Sorry, but there’s nowhere to go from there but down.”

“You gotta think,” the ghost told me. “Think how excited she’d be. Think how much she’d love you.”

“Think,” I said, “how this has got to be an elaborate joke involving a video projector and footage of someone who looks exactly like me 12 years ago.”

The next morning, I got up early -- real early, way before my wife gets up. I did the breakfast-in-bed thing, made a radio dedication to my wife, put flowers and poetry in her car, hung a banner from an overpass. I miraculously outdid myself. It was the bargain I made with ghost me the night before so he’d stop haunting me -- I had to get to sleep.

I was proud of myself. My wife’s birthday last year was her best.

That night she hugged and kissed me and said I shouldn’t have. And now, a year later, my wife’s birthday is coming up -- her expectations are up as well -- and I’m the one saying I shouldn’t have.