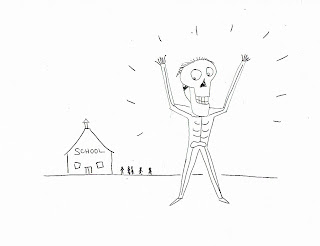 I bought my 9-year-old son a skeleton costume for Halloween.

I remember always wanting to be a skeleton for Halloween. For whatever reason my dad always had a better idea for my costume each year. So when my son said he wanted to be a superhero this year, I got him the skeleton costume I always wanted.

I’m joking. He wanted to be the skeleton. But I can’t say I didn’t nudge him in the right direction.

We found a really awesome skeleton outfit -- glow-in-the-dark three-dimensional bones with a really freaky skull mask. The company that made this thing really went all out.

“Your friends at school are gonna freak out,” I said to my son. “And freaking people out is what Halloween is all about.”

“But we’re not allowed to dress up for Halloween at school,” my son reminded me. “Remember?”

“What?” I said in disbelief. “Dressing up for Halloween at school is what Halloween is all about.”

“I thought it was all about freaking people out,” my kid said.

“That’s right, forget school rules,” I repeated. “We’re talking about Halloween rules here. And what a dumb school rule. I bet some baby kid got scared and the parents complained, as if being scared is bad. These adults don’t want kids to have emotions anymore. ‘You’re having too much fun, knock it off.’”

“Yeah,” my kid said in agreement. “These kids today are just babies. And so are their parents.”

When my wife got home, she asked why a skeleton instead of the superhero our kid wanted to be.

“Because freaking people out is what Halloween is all about,” our boy said. “And about dressing up for Halloween at school.”

I tried to stop my kid from saying more -- my wife would be against any school uprising.

“Wow, this is a pretty awesome skeleton costume,” she said. “The company that made this thing really went all out. Maybe you’ll win the costume contest this year.”

Had she also forgotten the no-dress policy? And what about this costume contest she manufactured in her mind? Well, who was I to let her in on the school rule?”

“Yeah, maybe he’ll win this year,” I went along. “Isn’t it the best -- dressing up for school, eager to see if anyone knows it’s you behind the costume you picked out, eager to see if you can figure out who your friends are behind their costumes?”

And then I thought about it -- my son wouldn’t have the same costume-going experience I had because he’d be the only kid in a costume. No other parent would let their kid disobey school rules. I had to tell my kid we were a no-go on the dressing-up thing at school. But it was too late.

“I wonder if Joey will be a skeleton, too,” my son said when I entered his room. “He loves skeletons. And I bet Tess is gonna be a werewolf. I bet I’ll figure out who all my friends are.”

I was in a pickle. I had to either tell my kid he couldn’t dress up for school or I had to lead him into big trouble. There was really only one thing I could do -- ignore the dilemma and hope it went away.

My wife saw me chewing my fingernails and asked what was wrong. She’d pick me back up. She always gave me the boost I needed to push on. So I told her my problem and waited for that boost.

“You idiot,” she said. “Why’d you tell him he could dress up against school rules?”

And then I thought about it -- why is it a rule not to dress up? What are the reasons?

I would call the school and find out, and then simply get the rule overturned.

By this time, my son had figured out what was going on. He was right there when I placed the call.

Idiotic reason after idiotic reason, I listened to some school representative list off nonsense. And when the lady was through with her chatter, I hung up.

“You’re not dressing up for school,” I informed my son.

“What about Halloween rules?” he asked.