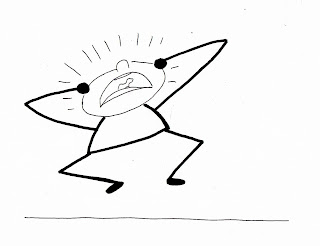 I never win. I wonder if that’s the way it’ll be forever.

I lose in sports, I lose in those dice and word games you play on your phone; I never pick the winners at Oscar time; I never place in contests, except for that one countywide poetry contest I won in second grade. But that doesn’t really count because the teacher entered my poem without my knowledge.

Eight years ago when my son was born, I made a promise that I’d save him from my bad gaming luck. Since then I’ve kept true to that promise -- I always put him on the team against me. He always wins.

A year or two ago, I stopped competing altogether. I’d come to the conclusion that excessive losing would eventually do something to my ego . . . or lack thereof.

And then some friends of the family asked if we wanted to participate in a day of park games.

I loved the excitement.

I came up with an alternative activity: “How about we walk the dogs?”

I could’ve said I was sick or busy searching for the meaning of life. I would’ve been done with the whole thing. But then our friends called me “chicken” and “fraidy cat.” I couldn’t walk away after that. I was too entertained by their paltry attempts to get me to play their games.

“You know,” my son said, “legends say you’re most likely to win when you have nothing to lose.”

I helped pack up the games -- horseshoes, our bocce ball set, water balloons, the basketball. We had a carload of games and refreshments for the day, and I was ready not to think about it.

The players were all very competitive. “We’re gonna kill you.” “How’s it feel to be the next biggest loser?” “I always win at this game.”

Have you ever tried to not think about something you're actively doing? It’s like watching a good movie -- you can’t help but get invested in the characters, the conflicts. You want the underdog to win. After almost winning a few games, I wanted to win even more. But even in those near-victorious moments, I never got cocky. I didn’t talk trash like the others did. When ahead, I’d say to my competitor, “Well, you’ve still won more games than I have.”

They’d respond with, “You actually think you’re gonna win this one, don’t you?”

Why did I do this dumb park games thing? I thought. I knew this would happen.

The people who played on my teams said what I was thinking. They suggested I sit out.

On my way to the sidelines, my son said, “Legends say that poor sports never win,” which was ridiculous, I told him, because I thought I did a pretty good job suppressing my poor sport attitude.

“If it’s so suppressed,” my wife said, “then why did you throw that water gun into the street and run out and stomp on it until it looked like sand?”

The spirit of the park games fell hard. Our friends were quiet, bummed, looking for a way to cut out early. This was my fault. I’d put a damper on the whole day. I’d ruined everyone’s time at the park.

Sweet bliss! That’d teach them to taunt me when I lost. I felt victorious for the first time all day.

At her request, I joined in the final game. I really didn’t care if I won or lost. I just wanted to go home.

If you thought this was going to be a story about how I turned the world’s longest losing streak into a winning one, then I apologize for misleading you. I lost again. Royally. And everyone was happy again. They really liked when I lost and they won.

In the end, my friends and family forgot about my bad attitude earlier in the day. They all thanked me for a great time. And I was off the hook.

I got lucky. I guess I always get lucky. I wonder if that’s the way it’ll be forever.