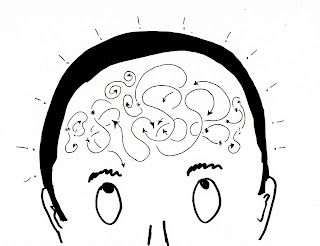 I even over-thought the title of this story.

I’m running out of space here -- I better get started. As I stated earlier, by the end of this story, I’ll no longer be an over-thinker. That’s because my neurosis recently went into high gear, and nothing can stay in high gear too long without eventually breaking down.

It all began toward the end of summer. My wife and I came to the conclusion that if I didn’t get higher-paying work, we’d never see the year 2013. To say this is an overstatement is an understatement.

Actually, no, it’s pretty accurate -- I had to make more money. And then, just in time, I noticed a job opportunity at work, one that would pay exactly what we needed in order to see the New Year.

No, the over-thinking and doubt came after I made my decision and took action, when it was too late to turn back.

I imagined management laughing at me for applying (“This guy actually thinks he’s good enough to apply for this job.”). I figured they’d disqualify me (“Sorry, only everyone else but you can apply.”).
I second-guessed my resume and letter of interest -- Why’d I attempt humor in my letter? I thought. I should’ve organized my jobs chronologically, not by skill set. And did I overdo it with the glossy paper?

A few days went by before I got an interview. My brain was at work the whole time.

They’re not even gonna call me in for questioning, I thought. I better keep looking for other work. But I’ve submitted hundreds of online applications and heard nothing. I’m no good. Maybe the right opportunity isn’t here yet. I’m not looking hard enough. Maybe five hours of sleep at night is too much.

When I got the interview, I was no less stressed. When I left, however, I felt really good about how I did.

And then I thought about it. I did horribly. Was I sitting up straight? I wondered. I think I mumbled. I know I repeated myself. There were those awkward pauses. But I needed those pauses to think. But I over-thought. Since when is thinking such a bad thing? Maybe management wants a faster thinker. Maybe the world will end in December as some people predict, making all of this irrelevant.

I asked myself why I put myself out there for failure. I guess if I didn’t apply, there could be nothing but failure. My brain kept spinning out of control while management made a decision. I wrote a follow-up letter, followed up in person and thought about a few other ways to check in. After a laborious debate in my head, I decided against further follow-up action. Then I followed up over the phone.

A week and a half later, the hiring manager called me into his office for my yearly review. I got excellent marks, the best I ever received. And then he told me I didn’t get the job.

I sat back in my chair and accepted the decision. I accepted my fate. It’s all I could do. So maybe I’d financially destroy my family. Maybe the entire world would end. But maybe my family would be okay. Maybe the world wouldn’t end. I couldn’t change how I got here -- over-thinking past moves was a waste.

I told my wife the news.

I told her I’d just have to continue working hard, continue looking for work.

I wrote that, by the end of this story, I’d no longer be an over-thinker.

I guess my story continues.