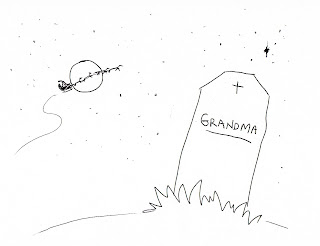 Why can’t my 9-year-old son ask for something simple this Christmas, like a Ferrari or a jet boat?

There are dads like me all over suburbia, I guess. I’m the kind who wants to get his kid the best Christmas gift ever. So when my son came to me and asked for a miracle, I told him no problem.

My wife was watching Oprah when my son and I walked into the room. The guy talking to Oprah on the show said he’d died, seen Heaven, and come back to life to tell the story. It was utter ridiculousness.

My son ate it up. And he wanted leftovers -- he wanted his grandma to come back to life, too.

“Well,” I told him, “that guy was dead for only a few minutes at best. Grandma’s been gone for over a year.”

“But that guy went all the way up to Heaven,” the kid retorted. “Grandma’s in Heaven. So she can just leave and come back down to Earth like he did, right?”

“I’ll write Santa,” my son cut in. “He always comes through.” And lucky for me that he does.

The kid got out a piece of canvas card stock (some really nice stuff for a letter) and laid down some of his nicest prose. His penmanship was remarkable, something his schoolwork missed. All the while my wife and I were trying to convince him to ask for something Santa could actually deliver.

“But not even Santa can bring a person back to life,” I said.

“Daddy,” the kid responded with little patience for my petty opinions, “come on. If he can make 300- to 500-pound reindeers fly through the air, and cover 197 million square miles of the Earth’s surface in one night in a sleigh, and live forever like he’s currently doing, then he should have no problem doing the one simple little thing I’m asking for -- bring Grandma back to life.”

“Well,” I said, “it isn’t a . . . Wait, how do you know how much reindeer weigh? And how do you know the square mileage of the Earth’s surface? Are those numbers accurate?”

As I steered my phone into Internet mode, my son said, “Go ahead, look it up. But I’m right.”

“Well,” I said, discovering that he was, in fact, right, “you’re not right. And you’re wrong about Santa, too. He can’t bring Grandma back. I know this because if he could, everyone would ask for loved ones to come back and there’d be all these people coming back to life.”

I was sorry to disappoint the kid, but it had to happen sooner or later.

“People are coming back to life, Daddy,” he said. “Zombies, and the guy on Mommy’s TV show.”

As my son shared his Christmas wish with the whole world, his smile began to turn . . . into an even bigger smile. No one supported him, but he still believed in the power of his wish.

But then some of his friends tried to tell him that Santa doesn’t exist. That’s what did it.

“Maybe Grandma can’t come back after all,” he finally said. “With no Santa, there’s no hope.”

The kid slumped into a chair.

Then, with a renewed energy, “New plan, Daddy!” he said. “We’re gonna trap Santa to prove he’s real, then we’ll just make him bring Grandma back if he wants me to protect his rep at my school!”

“Well,” I said, “I’m thinking this is going too far. I’m gonna have to stop this right now. Son, I have to tell you something -- Santa is, well, just too darn big and jolly to trap.”

Now, we’d made some killer leprechaun traps and even better Easter Bunny traps over the years, though we never caught our marks. But catch St. Nick? He’s a saint. How do you catch a saint?

Using ribbon and garland, a light-up camel from our outdoor manger scene, placebo Christmas gifts, candy cane candles, cookies and milk as bait, and a stuffed snowman to break Santa’s fall (it’s too complicated to fully explain), we tested the Santa Trap 2900 (patent pending) . . . on Mommy.

For a dad who likes to get his kid the best Christmas gift of all time, I was succeeding in making it his most disappointing Christmas to date. The trap failure was a real blow to the kid’s confidence.

“Exactly,” I said. “Next year we’ll bring Grandma back to life.” I’d worry about “the how” later.

“No, Daddy, we can’t bring Grandma back to life ever. I think that guy on Mommy’s show was just scamming us. We’ll just have to visit Grandma at the cemetery for Christmas. How’s that?”

And with that, he wrote another letter to Santa, this time asking for a Ferrari and a jet boat instead.