Can't Have Trust and Eat It, Too 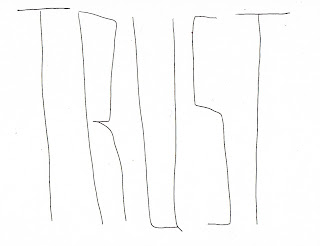 I couldn’t trust him at all. Things were going too well. And so came the whole looking-up-poop-on-the-school-computer-and-lying-about-it incident. Our son’s teacher sent home a letter detailing the matter. My wife and I asked the kid to come clean, said we wouldn’t get mad. We knew how to get the truth.

The kid said he didn’t do it.

After my wife and I caved, unable to get the truth we knew how to get, the kid confessed.

Then he asked if everything was better.

“What if I make a chart?” he suggested.

“Charting our trust won’t work,” I said, still standing firm, still the boss here. “You just have to prove that we can trust you.”

He tried the head-fall thing again. Pathetic. Like I’d fall for tha—

For each lie the kid had told, my wife and I charged him one week to prove his trustworthiness. We charted out a month. Every day he proved to be trustworthy, we’d check off a box. After the kid had 31 boxes checked off, we’d trust him again. That was the deal.

I wasn’t worried about me. I’d make my son earn those days of trustworthiness. I was worried about my wife. She was the pushover -- she’d just hand over the days. I had to be the firm one, the boss.

The first day, I told my son he could mark off three boxes for his good behavior at school.

“Three boxes?” my wife exclaimed. “I thought he could only earn one box a day.”

“Give the kid a break,” I said, standing firm as the boss.

The next day, our son admitted to goofing off in class. He knows better than to goof around like that.

“I’m proud of your honesty,” I said, giving him a high-five. “Mark off five boxes on the chart.”

“Hey, Daddy,” my son said. “So really, all I have to do is do bad things and confess, and I can earn back your trust in, like, five days.”

I could see what he was doing, trying to get the best of me. I wasn’t falling for that.

Before I could fall for that, my wife overheard the conversation and intervened.

“We don’t reward bad conduct,” she said, “even if you confess. You’re supposed to confess.”

“Yeah,” I agreed, standing firm as the real boss here. “You have to still be good. From now on, if you’re bad and you come clean, we’ll only mark off two boxes.”

I was getting pretty good at this. My wife was good, too. She wasn’t the pushover I thought she was.

The next day, our boy finished his chart. He’d earned our complete trust back.

And then we caught him in a lie -- he’d falsified his trust chart, marking off more days than we allowed. Then he lied about doing so. Our kid was treating this like a game, and that stupid chart wasn’t helping.

“Can I make a new chart to earn your trust back?” the kid asked.

I didn’t know what to do. My wife and I talked it over. We decided to trust our instincts. No chart could dictate whether or not we could believe our son. We had to just trust him. And I didn’t.

It’s now been a month. My wife and I have been on our son like CSI, checking his every move, even when he stirs in his sleep. He’s not told one lie. He’s not been sneaky. He’s even been good in school.

“Have I earned your trust back yet?” my son asked.

I was firm, the boss here, and wasn’t going to give in like before.

My son smiled. Then he ran off to his room to draw. I smiled. Then I shot over to the secret surveillance video bank in the office closet to see what the kid was really up to.