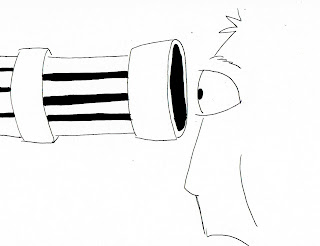 Living with boys will drive you crazy. My wife knows -- she’s got our 9-year-old son, our 3-year-old male beagle and, last but certainly not least, me.

We don’t try to make her crazy.

“You’re all so loud,” she said one day. “Between the sound effects and the made-up words to songs and the howling and the barking. That doesn’t even include the noise from the dog.”

“I thought you were a huge fan of my song work,” I said.

“You know it drives me nuts,” she responded.

“And that’s what I hate most,” she said. “You never take responsibility.”

Okay, so I could see we were driving her slightly mad. I decided to give her a break. I told her I’d take the kid to his eye exam that afternoon so she could stay home for some peace and quiet.

But it was a big deal to our son. He didn’t want to go. He feared eye appointments.

Great, now I’d have to deal with this all by myself. I had to be persuasive with the kid, make him feel comfortable, convince him that an eye exam is really no big deal.

At first glance, the eye exam machines looked like something out the “Terminator” movies, and my son didn’t feel any better about what the doctor was going to do to him.

The eye doctor put my son at ease -- initially, anyway.

Then the kid got silly. When the doctor asked him to look left, right, up and then down, my son became a comedy act.

“I roll my eyes at my parents all year long just to practice for this,” he joked.

The doctor did that puff-of-air test in the eye.

“Did you spit on me?” my son asked with a giggle.

While waiting for the test results, the doctor showed us a computer-generated eyeball.

“Is this thing like Google Earth?” my son asked as the doctor explored deeper into the eyeball like he was looking for a destination on our planet. My son’s awesome humor kept coming.

At the end of the check-up, we learned that my son’s eyes were in great health. And that was that.

But then at home, my wife asked, “When was the last time you had your eyes checked?”

“I went only four years ago. My eyes feel fine. It’s really no big deal.”

I knew what was coming next -- she’d claim I was setting a bad example for our son. And then my son would turn my “It’s really no big deal” words against me to get me to go to the stupid eye doctor.

“At least my eyes are perfect,” my son added.

What was this? They could care less about my health.

I called the eye doctor for an appointment. He’d care about me.

He didn’t have any openings -- not for a while, anyway. But I set a date. My wife and kid were happy for me. I was actually happy, too.

“When’s the appointment?” my wife asked.