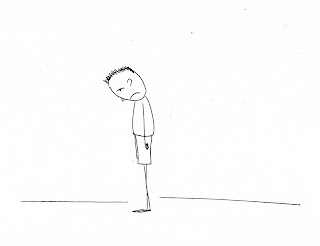 I’m not one of those competitive parents whose kid has to win at everything. I’m the parent who just doesn’t want his kid to lose.

So when my 9-year-old boy was playing handball with friends and losing royally, I wanted to step in and save him, call “cheating” on the other side, help him play better by playing for him.

But I couldn’t intervene. Instead, I ended the handball session, telling my son we had to run a family errand. Then I took him to the store and bought him a handball.

At home, we worked on his handball game. I set up a rigorous practice schedule to follow -- a two-hour session, six days a week for three straight months. Next time he played, he wouldn’t suffer a loss.

Problem: After the first day of practice, we never got around to practicing again.

Last weekend, some of my son’s friends asked if he wanted to play basketball. My kid begged to play. I told him we had family errands to run.

My son was all frowns. After his friends left for the park, he asked what was so important that we had to do. I explained that we didn’t have to do anything and that I just made up an excuse to save him from humiliation.

“Son, are you even good at basketball?”

“Yeah. I play at school all the time. And I really wanted to play with my friends.”

We caught up with his friends at the park just in time to play. The kids picked teams and decided that the first team to reach 20 points would win. I chomped on my nails as the players took to the court. I thought about turning away so I wouldn’t have to see my son lose. But I couldn’t help it. I watched.

He was actually pretty good. He even sank a jaw-dropping three-pointer. I didn’t think he could throw the ball that far, let alone make the shot. Then he made more amazing shots. It was “Ripley’s Believe It or Not” right before my very eyes. I called for a time-out, pulled my son aside.

“What’s going on, why are you so good?” I asked as if there was some trick he was pulling.

“I play at school every day, Daddy,” he answered.

I told him to keep it up. He was great. He even played great defense—blocking shots, grabbing rebounds. My son’s team was destroying the competition.

And then, in less than a few minutes, the competition struck back. A 13-4 lead became a meager 13-12 lead. My son was missing easy shots. He practically dusted off the ball, scrubbed it clean and handed it to the defenders.

The other team took the lead, 14-13, and talked some serious trash. They stole the ball from my son, laughed in his face. One player pushed my kid to the ground. Ouch! That really hurt. The other team ran off with the ball and scored the winning shot.

My son had scraped his knee and was in serious pain. He tried to be tough for his friends and walked it off. I so wanted to step in, but I didn’t want to embarrass him more by coddling him. At least the game was over and we could go home before any more damage occurred.

But then the kids wanted to play hide-and-seek. I didn’t get a chance to say no. The kids chose my son to be it. That made matters worse for him, limping around the park, all his friends hiding from him.

It continued to get worse. We somehow ended up at our house for video games. We were short one controller. The kids decided that my son would have to sit out. And my son just let it happen. I couldn’t let him suffer any longer. I was going to intervene this time, whether right or wrong.

Instead, my wife ended the misery, telling the kids it was time for them to go, that we had family errands to run. Wow, those kids must’ve thought, that family sure runs a lot of family errands.

I thanked my wife for rescuing our child, for saving him from more losing, more pain.

“Daddy, I’m okay,” my son added. “I don’t care if I lose. I let them win because they get mad when they don’t. And I don’t care about not playing video games either. I can play whenever I want.”

Then he told me he’d missed those shots on purpose and that he was happy to be it in hide-and-seek so someone else wouldn’t have to do it. I was proud to have such a thoughtful kid.

We played a video game together. He killed me. Evidently, he was through with charity work.