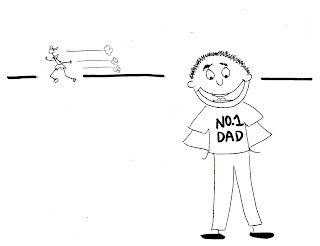 The world is against me.

My son is approaching his teenage years -- he’ll be 10 next month -- and his friends are pushing me out of the center of his universe. It’s not fair -- 10 years went too fast.

With Father’s Day upon us, I wondered if this year would be my final great year to bond. Worse, maybe last year’s tribute to Dad was the end.

But my son is really a good soul -- so caring. Even if he were losing interest in his parents, he’d hide all that to make us happy. He’d be miserable if it meant pleasing Dad.

Or not. His friends invited him over for a fun day of video games -- the Kid Gathering of the Century -- on Father’s Day of all days. And he wanted to go. How could he forget his obligation to be miserable in the name of Dad this Sunday?

So now he was going to be a martyr.

Meet my other self -- I tend to read into my conversations with people. While my son was showing enthusiasm to be with me instead of his friends, I knew what he truly meant.

“I can’t wait to have a day with you, Dad,” he said. “What do you wanna do?” (How about you drop me off at my friend’s house so I can play video games with people who aren’t from Dullsville?)

“You wanna go swimming?” I asked.

“That’s a good idea,” he said. (A better idea would be dropping me off at my friend’s house.)

Before going to work the other day, I made a list of things my son and I could do together on Father’s Day. During my lunch break, I called home to see what he thought.

“I haven’t looked at the list yet, Dad,” he said. (Ooops, was I supposed to read that silly thing? I hope Mom didn’t take the trash out yet.)

I could tell my son couldn’t care less. The good times with him were most definitely over.

When I got off work, it was late. I phoned my wife to tell her I was on my way home. She brought up Father’s Day, proposed a day to myself. Our son could play with his friends, she said, and she could get a facial or do something fun while I was at home by myself. That sounded amazing.

Nobody wanted to be with me.

I hung up the phone and drove the dark, lonely freeway home. When are the freeways ever empty in L.A.? Where was the traffic? Where was the stranded motorist on the side of the road I could spot and wonder what happened? Yes, I was alone. The world, I tell you, is against me.

When I got home, my wife and son were asleep. A note on the counter indicated that my dinner was in the refrigerator, and there were pictures that my son had drawn of the dinner in case the word “dinner” was unclear.

I could smile about that. I did.

The next day my son received word that the big video game event with his friends had been cancelled.

“Mommy told me that you were gonna have a day to relax,” he said, “but would you rather spend time with me?”

“Aaaab-soooo-lutely!” I said. (What’s Mommy paying you? Do I have to double it?)

The earlier list of things my son and I could do was mere child’s play. I planned much bigger, better stuff -- a bike ride, camping, fishing, s’mores . . . a back rub for Daddy.

And while my boy seemed excited about our plans this Sunday, I wondered if deep down all he could think about was the cancellation of his video game get-together with his friends.

“It’s not cancelled,” my wife told me later. “He just told you that because he didn’t want you to send him to his friend’s house to play. He wanted to spend the day with you.”

“Really?” I asked, considering what that meant.

OK, so maybe the world isn’t against me. Not this time anyway.