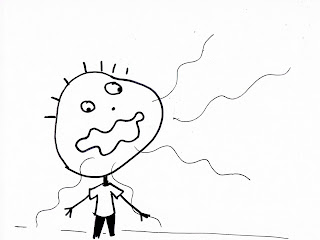 My 10-year-old son will fire 1,000 topics of conversation into your ear in less than 30 seconds. My wife and I attribute it to what we call his “extra battery.” He has ADHD -- his attention doesn’t stay in one place for long and he’s very hyperactive, especially through his speech.

So, do you verbally engage with a kid like that who has a so-called extra battery? Do you submit to the suffering in the name of good parenting?

The boy was having one of those severe ADHD moments, jumping from subject to subject as if each talking point were a hot potato, when he asked to keep me company while I washed the car. I could’ve asked if he wanted to help Mommy instead. What kind of dad would I be if I did that?

Who am I kidding? I asked. But my son said he’d rather spend time with me.

I could’ve ordered him to help his mother. What kind of dad would I be if I did that?

Heck, I tried that, too, but Mommy was already finished with her chores.

It was going to be the longest car wash ever. I had to vacuum the inside of the car, hose off the exterior, soap it down, rinse it and then dry it. Then I’d have to wipe the windows with glass cleaner, add tire shiner to the rubber and finally go over the whole car again with a wax job.

I considered trading in my dirty car for a new one, avoiding my son’s hyper speak altogether.

There’s an art to the segue that escapes my son in his conversations.

“Stuart across the street isn’t rude to people anymore. I wonder how I’m going to smile in my pictures for picture day next week.”

Anything, really, is up for grabs.

“Francis is the best crossing guard. He always reminds me about minimum days. You know what I hate, though? Club Penguin is always teasing me with Internet ads. ‘Buy this cool thing for better game play. How about this even cooler app?’ Hey Daddy, would you be able to help me with my Grandpa shelf? I already put up a picture of him, and I set up the model pirate ship he gave me. But what else? Oh yeah, does the moral of a story always have to be at the end?”

I’d join the conversation but there was no room. Besides, leaping from one thing to the next at such a rapid rate made my brain pant like it was out of breath. I wondered if he’d tire if I stopped talking and let him do all the work.

He only picked up momentum. By the time I finished vacuuming the car, I didn’t even know what he was talking about. After hosing down the car, I gave the kid a sponge and told him to scrub the car, hoping the task would end his voice.

The words kept coming. But they slowed to a light barrage and continued to decline.

Ah, man. That’s not what you want your kid to say. I want to give my son my full attention. I love him. It’s not his fault he has ADHD and talks uncontrollably about birthday cakes and the art of the double knot simultaneously.

If I was going to suffer in this summer heat to wash and wax my car just so I can have a nice-looking vehicle that goes the distance, then I should’ve been willing to endure my son’s nonstop talking to help him grow into a confident young man who will still be kicking when my car is long gone.

“Because a shammy doesn’t leave water spots or swirls or scratches,” I replied. “I used to think towels were easier because you didn’t have to ring them out like you have to do with a shammy, but the towel gets wet so fast that you end up spending more time drying because the towel is drenched. Grandpa Jack taught me about using a shammy. Hey, I have an idea for your Grandpa shelf -- you can add those pirate keys he gave you. Next time we go to Disneyland, we should get a pirate map, too. We gotta go to Disneyland again. You wanna get a Slurpee when we’re done with the car? Oh yeah, and the moral of a story should always be at the end.”

When the day was done, I told my wife our ADHD kid had worn me out. That ADHD is brutal.

“That’s not the ADHD in him talking,” she said. “I’ve heard you talk. It’s called genetics.”