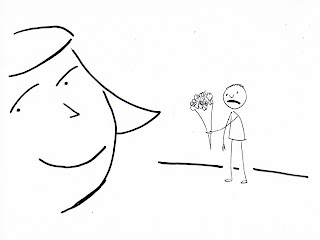 I don’t give my wife flowers. After only a few days, they’re drooping, smelling and dead. I even hate the process of buying flowers.

“What’d you do wrong?” guys ask, laughing. Ladies don’t say anything. Not with words anyway. They know you committed an unspeakable crime against all womanhood and that you’re shamelessly attempting to buy your way back into their good graces with flowers.

It’s not like you can be discreet about buying flowers. That plastic wrapping is so noisy. In line, everyone turns their attention to you because they know that crackling plastic sound -- it’s the sound of a man crawling back on his knees to his always-innocent woman.

I bought my wife flowers for years, but not to say sorry. I love her. It took some time before the question occurred to me: What if I stopped buying them? It was a hypothetical question, nothing more.

Would she even notice? I wondered. Would she care? She never made a fuss over flowers.

This was my wife, not some stranger. If it were a stranger, I could just open it up for discussion. A wife, however, you had to live with till death do you part. The mere thought of depriving her of something like flowers is a dagger she could stick in you the rest of your life.

My wife and I share everything. She wouldn’t get upset.

No flowers it was. Not only did my wife appreciate my honesty and willingness to discuss my feelings with her, she also liked the idea of saving money, a rare commodity in our house.

Sometimes I wonder if life would be easier without outside forces. Friends and family and even strangers love to ruin a good thing. I had it made, and then these outside forces started meddling.

“But she doesn’t want flowers,” I told one of my wife’s friends who thought it was totally fine to call me at work and ask why I stopped buying flowers for the woman of my life, the mother of my child.

Even my own mother turned on me. “Mike,” she said, “you can’t not buy your wife flowers.”

I bought my wife more thoughtful things. Flowers, after all, are too easy go-to items. What’s more thoughtless than flowers? I wrote my wife letters, got her pedicures and things she needed, things that wouldn’t die in a few days. My wife loved it!

“You don’t have to buy your wife flowers anymore?” my friends asked me.

I couldn’t help it. I answered with the question, “You’re still buying your wives flowers?”

What happened next was as improbable as Bigfoot or a crop circle on my front lawn. A small U-Haul pulled up to the house across the street and my new neighbor saw me out front and asked for help with a few large furniture items. No problem. Except that she gave me her business card. The flower shop she owned in town was running a 20-percent-off discount on all floral arrangements.

When I told her I don’t buy my wife flowers, she found it necessary to pin me to the corner of my garage and tell me how I can’t declare my love any other way.

“Did you know the language of flowers during the Victorian era was, to lovers who couldn’t communicate verbally, the only way to share feelings and emotions? A periwinkle, for example, means a happy memory. A primrose means you can’t live without the other. It’s not too late, Michael, to give your beautiful wife a hyacinth, which means you’re sorry, as I’m sure you are for depriving her of so many bouquets, which, for a limited time, you can get at my store for 20 percent off.”

A sales pitch no less, but this secret language she spoke of had its allure.

I bought a book on the language of flowers. It was like a secret decoder ring. And I took my new neighbor up on her 20-percent-off discount and purchased a variety of flowers, which told a whole story.

Before I could share my secret message through flowers with my wife, she had a few messages of her own to share. Evidently, the wives of several of my friends had called complaining about an idea I gave their husbands regarding no more flowers.

“That was a mistake,” I said, offering her the language of flowers book and a few bouquets.

“It’s too late for that,” she said. “The fact you considered cutting them out in the first place is a disappointment.”

The flowers sagged and turned dark crimson in color, which, according to my flowers book, means mourning.

This story starts with a chuckle and works its logical male way around to the hilarious final sentence. Well- crafted and entertaining, this story also contains Great Truths about the ongoing struggles inherent in the married condition.

This story starts with a chuckle and works its logical male way around to the hilarious final sentence. Well- crafted and entertaining, this story also contains Great Truths about the ongoing struggles inherent in the married condition.