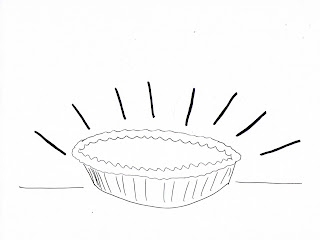 Last year before Thanksgiving, my son, who was 9 at the time, tried to convince me that Mommy hated pumpkin pie. How can you hate pumpkin pie?

“It’s one of her favorites,” I said. “Mommy and I have been married for 13 years. Trust me, I know what she likes and doesn’t like.”

At Costco we ran into the greatest pumpkin pie I’d ever laid eyes on. It was big. It was beautiful. It was only $5.99.

“But Mommy’s gonna hate it,” the kid said.

“Didn’t we already have this conversation?” I said. “Trust me, I know Mommy. Throw it in the basket.”

While in line to buy the pie and a few other items on our shopping list, my son shared his excitement for our upcoming Thanksgiving feast.

“I can see it now,” he said, “me, the pumpkin pie -- in a serious relationship, kissing, biting.”

You can’t go wrong with pumpkin pie. I was confident.

“You wanna slide the card?” I asked when it was time to pay. A few months prior I’d hurt my back and couldn’t stand up to walk, and so I let my son pay the pizza deliveryman with my credit card. He got such a kick out of the transaction.

“Is that even a question?” he asked as he yanked the card out of my hand and slid it through the machine.

The pie was ours.

“Sweetie, you know I hate pumpkin pie,” my wife said when she saw the monstrous thing lying on the kitchen counter.

“He bought it,” I said, referring to the one who slid the card.

Evidently my son was mad at me for throwing him under the bus. Hey, I had more to lose than he did.
So the plan was to go back to Costco and get Mommy the pie I knew to be her favorite -- apple pie.

“You think I don’t know my own wife after 13 years of marriage?”

At the store for a second time that day, we came across a wonderful pecan pie. Next to it was a shining cherry pie, and I started to think I got my pies mixed up. Maybe I bought the pecan pie that year for dessert night and upon learning I got it wrong she told me her favorite pie was cherry.

“No, Daddy, you’re right,” my son said. “I remember Mommy saying her favorite was peach pie.”

“I didn’t say anything about peach pie. I said pecan pie.”

We were doomed. My wife would think I was a terrible husband for not knowing her or paying attention.

“Daddy, you’re just gonna have to take the fall this year,” my son said. “Once you choose the wrong pie, find out what actually is her favorite pie, then next year you’ll know for sure and you’ll be the great husband that Mommy knows and loves.”

The kid is smart, and so I went with his memory and bought the peach pie instead of the cherry or pecan pie. If it failed, I’d have to suck it up. And simply point the finger at our child.

I laid the peach pie on the kitchen counter. Then I ran.

My wife loved it. Last Thanksgiving was great.

This year we have a new problem. As Thanksgiving approached, my son and I were tasked to get dessert again, and we couldn’t get our stories straight. I’m confident that the peach pie was the winning dessert we bought last year, which is why I told the story as I have. While writing this, however, my son is over my shoulder telling me I’ve got it wrong, that it was the pecan pie we bought.

We agreed to disagree, but now I worry my wife will think I don’t know her. I know my wife. I bought both pies to be safe.

Both were wrong. She wanted pumpkin pie. I’m convinced --Mommy can’t make up her mind.

A drop field accommodates a hinged lid with quantity of} locks whereas a drop bucket doesn't contain a lid. The contents of drop buckets and drop packing containers are collected and counted by the on line casino on a scheduled foundation. In truth, music appearing as a sort of trick goes all greatest way|the method in which} again to the original slot machines. At that point although, gambling machines have been generally unlawful. As Laura talked about, 코인카지노 in style music is an enormous development, but additionally films, similar to James Bond, Rocky, and Ferris Bueller’s Day Off.