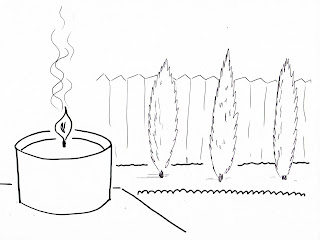 My wife has this lavender-scented candle.

“Don’t you love it?” she said as I tried to figure out why my nostrils went from burning to charcoal so fast. Her candle is so potent that the headaches in my head pound on my eyeballs to get out. The candle doesn’t smell good either.

But if I wanted my wife to get rid of the candle, she’d get rid of it. I just allow her burn it.

“He thinks he gives me permission,” she once told a friend. “I just allow him believe that.”

As veterans of marriage, this is the game we play.

Spring is here -- time to plant. I’ve long wanted to put in Italian cypress trees, like the ones my family had in the backyard of my childhood home. Maybe it’s nostalgia. Maybe they’re just great trees.

“Don’t you love ‘em?” I said to my wife, at which point she tried to come up with a follow-up joke to mine. But I was serious. My love for those trees is real.

We discussed the aesthetics of trees until one of us (I’m not saying who) actually said that the trees that change most with the seasons bring the most joy. Anyone who says that has obviously never had to go through a box of Hefty trash bags to pick up all the leaves those “joy-bringing” trees drop in the fall.

“I’m simply not gonna let you put cypress trees in the backyard,” my wife finally announced.

“Let?” I barked. “You think John Wayne had anyone let or not let him do what he wanted to do?”

“You think John Wayne ever wanted to plant cypress trees?”

Well, pilgrim, out here in suburbia a man settles his own problems. And that’s just what I was gonna do. As soon as my wife left the house.

She had a day of shopping planned, and when her car turned the corner, I grabbed my 10-year-old son and we flew to the Home Depot to buy some cypress trees. That way my son could shoulder some of the blame if it came down to that.

Planting the trees was invigorating. I’d never done it before and I must say I was enjoying the process.

“Why’s this taking so long?” my son whined.

“You can’t rush the creation of life.”

“Hurry, throw the dirt into the holes,” I shouted to the kid.

When my wife found us out back, the trees were a done deal. And I was ready for the attack.

There was no gun. She wasn’t going to pick a fight, anyway. That’s when the guilt hit me.

“I figured you wouldn’t mind my getting just three trees,” I said. I don’t think I sounded weak. “I never say a word when you burn that lavender candle. That thing really causes me pain.”

“While you’re back here,” she said, ignoring everything I said, “you should fix the cement blocks in the planter box -- the ones leaning over. And the fence -- some of those boards are loose.”

How would John Wayne respond to that?

“OK,” I answered, and I started fixing up the planter box and fence. Hey, John Wayne’s been dead over 30 years, and I have at least 30 more years with my wife.

I had my work cut out. But I got into it. I even added other projects. I got some yard lights and some accent rocks, strung up some clear globe lights over the back patio. The place was turning into my own little backyard oasis, a Shangri-Yard. My wife was going to hate it.

No doubt this was a con. As veterans of marriage, this is the game we play.

When I couldn’t figure out her angle, I asked. She said she wasn’t up to anything, that she really liked what I did, and that the cypress trees were growing on her.

“Let me show you. I got some new clothes and some hand lotion. And another one of those lavender candles for when our other one is finished.”

“It’s one headache after another,” I warned a friend who asked me for marital wisdom after he proposed to his girlfriend. “But like John Wayne said in ‘Stagecoach,’ ‘There are some things a man just can’t run away from.’”