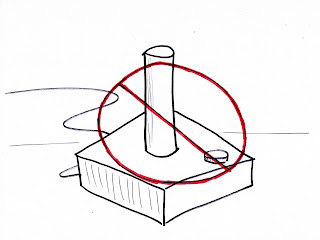 For fun, my 10-year-old son decided to play a Wii Sports video game. He kept losing. Where’s the fun in that?

The kid doesn’t even know how to use the controls. He just hits buttons, swings the remote around the room wildly, jumps up and down frantically and hopes to throw a winning punch in a boxing match or get a hit in a baseball game. I keep worrying he’s going to bounce and shake himself and our living room to pieces.

During a recent tennis match, he kept missing the ball on high returns and claimed the game was cheating.

“Why doesn’t it let me get it?” he asked nobody in particular.

“Because you’re not doing it right,” I answered. “Did you read the instructions? They can’t really intend for you to shake the remote like that. It’s gonna break.”

Now, I could’ve told my son to turn the game off if he didn’t change his tone. But what does he learn? Instead, I decided to teach him about patience. I showed him the instruction booklet.

Then I told him how to use the controls correctly. Still, the kid had trouble. So I had to show him how it was done.

For the record: I don’t get along with video games. After hours of play, there's nothing to show for it. Just a score. And what does that really mean? Nothing. No real satisfaction. But I decided to play the game and teach my kid how to do it right and how to have patience. I’d have a better-behaved kid to show for my efforts.

“Here’s how you do it,” I told my son as I took the controller.

I couldn‘t get the darned thing to cooperate. There I was hitting buttons, swinging the remote around the room wildly, jumping up and down frantically trying to get at least one point on the board.

“It requires practice, that’s all,” I said. “Let’s play something else.”

My son thought I meant we should play another sport in the video game. Whether I liked it or not, I was going to have to play something long enough to master it so I could then show my son how to master it. Only then would I be able to teach him anything about patience.

We chose to play baseball. As we got better, the gameplay got more difficult. We struggled just to catch fly balls and make simple infield plays.

“This stupid thing is cheating!” my son yelled.

“If it’s so stupid, then why are we playing?” I asked. “Isn’t the purpose here to have fun?”

The kid wasn’t giving up. He kept getting angrier and angrier until he slammed the remote into the couch several times out of frustration.

My son stormed off to his room, slammed the door behind him.

“You slam stuff around when you can’t fix something in the house,” he said.

What the heck just happened there?

“I’ve never slammed any doors,” I responded. “That’s not OK.”

After the kid apologized for his ridiculous behavior and when everything was good, he asked if he could play the video game again.

And I left him in the room to continue cooling off while I shut down the game system. Only thing is the system wouldn’t shut down.

“What the heck is wrong with this stupid thing?” I yelled.

I banged on buttons, flipped switches. Nothing.

So I yanked the cord out of the wall, hit the TV button off and slammed the doors of the entertainment center so hard the game system had to know who was boss.

Finally, for the first time all day, someone other than the video game won. Ah, satisfaction.