Beware of the Moon 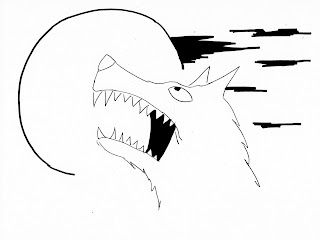 No he’s not! I’ve still got the rest of the summer to call him my little boy. He was born only 10 years ago. I guess he’ll be 11 next month, though.

I had an idea: If I could just stop time, he wouldn’t have to grow up.

It was Friday the 13th. And a full moon. I read somewhere that a full moon on a Friday the 13th won’t happen again until the year 2049. My son will be 46 years old. There’s no denying it -- the kid is getting older. And I wasn’t against that. I just wasn’t for it.

“No they’re not,” he said, clearly too old to believe in all that. And then he twisted the dagger in my side. “I know werewolves aren’t real, (here it comes) Dad.”

“Whoa, what is happening?” I said. “Werewolves are real. Have you ever seen a werewolf?”

“Exactly my point, Dad.” There was that “Dad” stuff again. “I’ve never seen a werewolf.”

“Exactly my point,” I responded. “Believing is seeing.”

I talked to my wife. “He doesn’t believe in monsters anymore.”

“Don’t tell him about monsters,” she said. “He’ll have nightmares.”

“That’s what I'm trying to say,” I told her. “He’s growing out of nightmares.”

She heard what I was saying. Even if she was on the phone, she could still hear me.

After dinner, we were finishing up our root beers, playing a game of darts, and my wife told our son, “No bike ride tonight, werewolves out.”

Good girl, I thought. We can stop this growing up.

That was me sulking. But our boy was right behind me.

“Yeah, stay on the trail, keep clear of the moors,” I said, giving my own rendition of a line from “An American Werewolf in London.”

“Yeah, Mommy, we’ll keep clear of the moors. What are moors?”

After creaming us both in darts, the kid took me aside and said he still called his mother “Mommy” because she was more sensitive, and I was a man.

Yup, this was really happening. The kid was getting older. But he was right -- I was a man. I mean, I am a man.

Before he could answer, he got a call from a friend and couldn’t talk anymore.

“This is not happening,” I said.

My wife and I had to come to grips with this whole growing-up thing. That night, while our son talked on the phone, we discussed our new reality. I hated talking so bluntly to my wife because she was so sensitive about our son not being her baby anymore. I made a comparison to soften the blow.

“It’s like the man living with the werewolf’s curse under the full moon,” I said. “Our son is changing, transforming before our eyes, except he’ll never be a little boy anymore. He’s gonna change into a werewolf and then call it a day.”

“Why are you OK with this?” I fired back. “Why aren’t you comforting me?”

When our boy got off the phone, I confronted him. “Son, you’re right, you’re probably too old to believe in werewolves anymore.”

He said he was too old. Then he asked if he could go over to his friend’s house to play board games with her and her family. Key word: “her.” A girl made my son grow up. What was next, cologne?

My wife and I let our over-scented boy go. And we decided to take that bike ride after all. As we parted ways with our son, he humored us with, “Mom, Dad . . . Beware of the moon.”

For example, when difficult cuts have to best gel pens for coloring be made at numerous levels and angles on a workpiece, may possibly} all happen within minutes on a CNC machine. In today’s CNC protocols, the manufacturing of parts via pre-programmed software is mostly automated. The dimensions for a given half are set into place with computer-aided design software after which converted into an actual completed product with computer-aided manufacturing software.