To Make a Long Story Sport 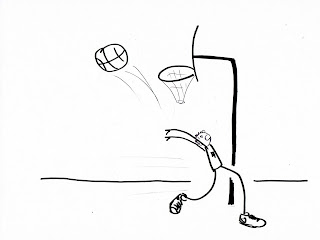 Sports -- my 11-year-old son never really got into any of them. Until this year.

When he was younger, he played soccer and tried karate, and he would've been good at both if it wasn't for the whole athleticism part of it all. Then, a couple months ago, he asked his mom and me if he could play basketball.

Are we doing our son a disservice by putting him in a sport now, when most kids his age have already been playing since kindergarten? My wife and I don’t want to see him fail miserably. We don’t want the other kids knocking him down. We don’t want him riding the bench every game.

“I really wanna play,” he told us.

“You know it costs money, right?” we asked. “Are you sure you wouldn’t rather go to Disneyland or get a trunk full of video games? How about a new car? We’ll go down to the DMV and see if we can get your driver’s license early.”

“I really wanna play,” he repeated.

We signed him up for a basketball clinic. It was more about the fundamentals than competition.

The kids at the clinic were so much better than our son. They could dribble, shoot; they knew plays already. And then there were the kids in our son’s group -- my wife and I called them the Bad News Bears, and they were truly awful. We couldn’t be more thrilled.

Warm-up on the court before practice was one thing. Working on individual skills with the coaches was probably the worst thing I could’ve watched for my self-esteem as a parent.

“Can you please stick two sharpened No. 2 pencils through my eyeballs?” I asked my wife, who took the easier way out and simply covered her eyes with the palms of her hands.

Even the kids who looked bad played like members from the USA Dream Team next to our son. I knew then their mothers had swallowed basketballs during their pregnancies to get their kids started early.

My wife and I were right there with our son as he struggled.

While all the other kids were laying up their shots, our son was still in the backcourt trying to figure out the left-right step -- he kept doing a left, right-left hop. The coach explained the move again. My wife and I knew our kid wasn’t getting any of it. We were sidelined and totally helpless.

“Don’t step in,” my wife whispered to me. “Don’t be that parent.” Then she saw our boy do another right-left step instead of left-right. “Left-right,” she shouted, “not right-left!”

Our fears, our anxieties and our nervousness were all encapsulated in our son. My wife and I saw him suffer all the problems we’d passed down to him through the genetic process. The three of us were being put through an exercise of patience -- we needed instant results, and we had two chances of getting them -- slim and none, as Laker announcer Chick Hearn used to say, and slim just left the building.

“This thing’s in the refrigerator,” I told my wife. “The door’s closed, the lights are out and the Jell-O’s jigglin’. We’re doing our kid a disservice. We put him in basketball too late in life.”

A reputable source later told me that Lakers star basketball player Kobe Bryant started playing when he was 12 years old, a hope that starting our kid late in a sport wasn’t hopeless after all.

“What reputable source?” my wife asked.

“One of the kids on the team.”

“One of the kids on the Bad News Bears?”

According to a real source, Kobe actually started playing when he was 3.

“We’re doomed,” I said. “It’s time we end this. We gave it a shot and he’s clearly given up. If he really loved the sport, he’d stick to it. His heart wouldn’t let him quit.”

“It’s only been one day of practice,” our son told us in the car. “I really wanna play.”

So we let him play.

The first game -- nervous time. We watched our son work really hard. He played solid defense. He got an assist, knocked down a free throw and almost hit a jumper at the buzzer. By “almost” I mean he got the ball off, but it was an airmail special.

Today our boy is better than when he started and progressing nicely. And while he's still behind on his skills, I no longer think we're doing a disservice. In fact, I think we're providing a service. My wife and I have offered up our child as a confidence booster to the other players every time they run him over.