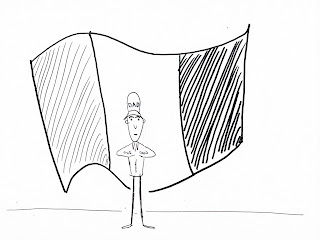 I have Italian-American parents, and they have a unique way of parenting.

My book, “Everything Ever After (Confessions of a Family Man),” is a collection of stories from this column. My parents were more than thrilled about it, and I was more than thrilled that they were so thrilled. It’s not that they’re not supportive; on the contrary, they’re very encouraging. But there’s an Italian way of handling children.

“What’s the publisher doing to get your book out there?” my mom asked. She decided it wasn’t enough and asked me to send her 300 copies of the book so she could do better.

“You should’ve written about being Italian-American,” he said. “We got the best food, the best painters, Frank Sinatra, ‘The Godfather.’ A.P. Giannini of Bank of America financially rebuilt San Francisco after the 1906 quake when no other bank would loan money. He helped Disney fund the completion of “Snow White” and was instrumental in Hollywood and in California’s wine business.”

“Dad, I write a family humor column,” I said. “How do I put that kind of thing in there?”

A couple weeks ago, my 11-year-old son came home excited about a science test he took. His grade was barely proficient.

“Yes,” I answered. Then the Italian parent came out in me. “But you only barely made proficient.”

Why can’t anything be good enough? I thought. Why do I always want more? Why do I feel that everything can always be better? I’m gonna have to do better about that.

From then on I tried to look at everything through new, everything-is-good-enough eyes. And it worked. Nothing could be better than what I had.

But something was missing. It’s hard to not want more. You know, some people think a good case of greed is healthy.

“Greed, for lack of a better word, is good,” says Michael Douglas’s character in the movie “Wall Street.” “Greed is right. Greed works. Greed clarifies, cuts through and captures the essence of the evolutionary spirit. Greed, in all of its forms -- greed for life, for money, for love, knowledge -- has marked the upward surge of mankind.”

“No one’s complaining about you being greedy,” my wife said.

But I was complaining. I guess that’s the Italian in me, and it had a chokehold on me -- Am I doing enough for my family, am I living up to my expectations in life, can I do better?

My stress went to my lower back. I couldn’t even walk. That’s when complaining comes in handy.

“You gotta get it off your chest,” my wife often tells me when I get back pain.

But that’d reinforce the “never good enough” attitude I so wanted to avoid. I wanted to be happy with what I had.

“We also got Robert De Niro,” I recalled my dad saying earlier.

De Niro was great in “Godfather II.” Thinking of him in that movie made me realize something we Sicilians possess that pushes us to overcome adversity, to do better, to succeed: Revenge!

In the final scenes with De Niro in “The Godfather Part II,” his character goes back to Sicily to avenge the death of his parents and older brother, and become the Godfather. I needed a revenge plot like that. Call me greedy, but I just wanted more.

So I got even with my mom -- I sent her those 300 books so she had to promote it. And I got back at my dad -- I put that Italian stuff in my writing after all (see the beginning of this story, Dad). My mom and dad’s “more” turned out to be more for me in the end -- more books sales, my dad off my back. And I helped them feel better, too, so I could feel better about my greed.

I still had one last confrontation -- one with my son. I’d make him pay for barely getting proficient on that science test.

I helped my son study for that next science test until his brains came to a slow boil. He aced the test.

See? Greed is good. I felt much better. Even my back pain had gone away.

The next weekend, my son called me to the backyard. He showed me how he could hide the dog’s bone anywhere and the dog could find it by smell every time. I was amazed.

My son barked at the dog to find it faster.

“Take it easy on him,” I said. “Where’s all this aggression coming from?”

Evidently, that Italian parent is in my son, too.

Michael, I just read your latest column and sent it to my family in Minnesota. We (mom and day, son and family) are planning a trip at Thanksgiving to this could place. I mention that because if you don't like snow sports there is not much to do. They live in a very small town. Your article just said all we talked about this morning. REally, are best visit with family have been doing nothing but being together, enjoying each other, playing games, looking at old pictures, watching old videos of family gatherings. Our MN family to California last year for Christmas, and we offered Disney land, etc but they did not take us up on it. 10 days of just being in the same house, wonderful time. Of course I over did the cooking business but we will not do that this year. I think we only ate out one time, had pizza delivered a couple times, not an option though in Blackduck, Mn. No deliveries of any kind there. Thanks for the reminder of how important it is to build quality time into family. Came at the right time for me...

I wanted to comment on this one too because I have an Italian friend who drives me crazy about being Italian, she blames everything on her heritage. Well I am a southern girl, country to the bone but she has to always get an up on me, is that the Italian in her? I am pretty sure all parents want their kids to do better, all parents still try to parent their adult parents.
The culture one grew up in does play a part of how we do things as we grow into adulthood. We have lived in two third world countries and many of the states and have tons of friends all over the world, and some things are the same across the board. We all want to control others and events, it's our heritage from the garden of Eden. Eve got Adam to take a bite of the apple...really like this post.

Thanks so much for reading! And thanks for writing.

In reference to your comments regarding my story, "Time Just Won't Fly Without Fun" ( http://www.toacorn.com/news/2016-08-04/Family/Time_just_wont_fly_without_fun.html ), I'm so glad you got what I was trying to say. I wish I REALLY did have a secret for making visits last longer.

Regarding the "Italian-Amer-enting" story here, I totally agree with you on heritage from the Garden of Eden.

I really appreciate your kind words and I hope to read from you again.