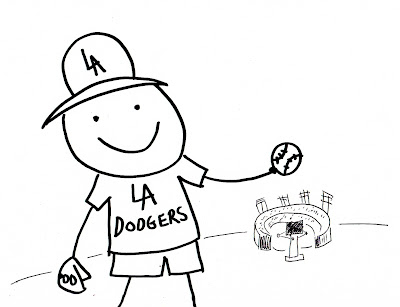 I’m not a cheater. But I’ve had second thoughts.

I was born a Los Angeles Dodgers fan, wearing Dodger Blue not baby boy blue. My first baseball game was with my dad at Dodger Stadium. It was helmet night. I still have that helmet. My first real hot dog was a Dodger Dog. First time I heard a game on the radio, Vin Scully was calling it as nobody else can. And no organ sounds as sweet as the one at Dodger Stadium, with Nancy Bea Hefley at the keys punching in “Take Me Out to the Ball Game.”

L.A. is my town -- Dodgertown, as the marketing campaign suggests. So when my in-laws invited my wife, 7-year-old son and me to an Angels game in Orange County, I said, “No thanks, I’m a Dodgers fan. I watch baseball at 1000 Elysian Park Avenue.”

But my son, now quite the baseball fan, wanted to go. “Please,” he begged.

“If I go,” I said, “I’m wearing Dodger Blue.” (The Dodgers weren’t even playing the Angels.) My father-in-law said, “You’ll be the only one not wearing Los Angeles Angel red.”

And off we went to see the Anaheim Angels(there’s only one baseball team really in Los Angeles).

Right away I felt like I was at Disneyland. The entrance was more like an amusement park plaza -- themed, corporate and pristine. The inside halls were the same. Even the seats were too nice for a ballpark. The place was like a sitting room I had in my childhood home -- we weren’t allowed to sit on anything. My mom feared that use would wear down the beauty.

Angel Stadium might be nice, but it has no character, not like Dodger Stadium. And the fans are just like their park -- we might as well have been at an opera with these people. They were so tame I was surprised when I heard a fan finally criticize the umpire for missing calls, telling him to “check his cell.”

“I hate to say this, Daddy,” my son said by the end of the first inning, “but this place is way cooler than Dodger Stadium.”

I think the kid only said that because of the Disneyland-esque waterfall in the outfield and the fireworks that launched out of the rocks out there. Little boys like that stuff.

“Hey,” I said, “this place would be way cooler if it had a haunted mansion ride in the team store, but that has nothing to do with baseball.”

By the start of the fifth inning, my wife had caught Angel fever, and she’s a Dodgers fan. My father-in-law, who grew up a Dodgers fan but who goes to Angels games because he now lives in Orange County, caved and bought an Angels ball cap. Even my sister-in-law, who’s one of the biggest Dodgers fans I know, took off her sweatshirt to reveal a bright red t-shirt underneath.

“Everyone wears red here,” she said. “Don’t worry, it’s not an Angels shirt.”

I suppose she has a right to wear an Angels shirt if she wanted to. The Dodgers franchise has left so many fans disenchanted. Bad trades (I’m still not over the Mike Piazza deal), bad ownership, bad fan behavior, falling attendance, and now this bankruptcy nonsense adds up to more than just bad times. Why can’t it just be like it once was? Thinking about it, maybe it never “was.” Maybe it’s all nostalgia -- better with time.

As I watched everyone enjoying the game, I realized I wasn’t having a good time. How ridiculous, I thought. I’m at a baseball game not having fun. Why should it matter that the Angels have a better park, with better parking and a great front plaza, with clean facilities and happy—not rowdy—fans? I should be happy that I don’t have to chain my son to my body to make sure he stays safe?

So I enjoyed the rest of the game. And we left at the very end of the game instead of after the 7th inning and still pulled out of the parking lot with ease. We got right onto the freeway (big difference). The next day, I proudly admitted to everyone I came across that my trip to Angel Stadium was a great treat.

Summer is now here. It’s the Fourth of July on Monday -- the Dodgers play the New York Mets in L.A. and the Angels play the Detroit Tigers in Anaheim. My wife asked which game I wanted to attend.

“I’ve never been a cheater,” I said. “But I’m having second thoughts.” My wife’s jaw dropped. “Second thoughts only for a second, though. Dodger Stadium it is!” 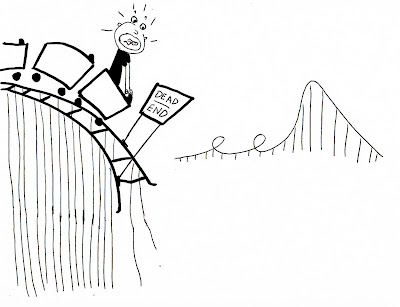 I’m what you call a roller coaster freak. If it promises to kill its riders, I wanna go on it.

However, I’m a family man -- I have a responsibility to live, and I can’t do things that threaten my life anymore. So of course when an old friend who made it big in the roller coaster-making industry asked if I wanted to be the first to ride his newest creation called Death Coaster, I said, “Heck yeah! I’m in.”

Back in our bachelor days, my friend always needed a place to crash. I called him The Crasher. I let him crash on my couch on a weekly basis. And I let him bring his friends over, too, and let them crash . . . and control my TV and use my shower and eat my food. The Crasher owed me big, though I never asked for anything.

Then, the other day, he called out of the blue and told me what he’d been up to the last 10 years -- building roller coasters. And he wanted to pay me back for all I’d done for him by letting me be the first to ride his new deadly roller coaster.

My wife said that I couldn’t die yet, that I still had to help raise our 7-year-old son. I could see her point.

On my approach to Death Coaster, I noticed workers still at work on the steel beast. For all I knew, there was missing track. I was so in.

At the coaster station, I bumped into other people waiting to go on the ride -- old friends from the old days, giving me a hard time because I was gonna get to go first. The Crasher said I’d be first to ride and he meant it. I was literally taking the maiden voyage. This thing hadn’t even been safety tested yet.

Now, these other riders were dressed as if they were testing the space shuttle, wearing boots and safety suits. I had on shorts, a T-shirt and sandals. My shirt had the words Oh Yeah! written across the front, which is what I said when I heard this coaster had 20 loops in a row. My sandals: Psyclones—those are some bad sandals.

The Crasher told me to put on close-toed shoes. I told him not to worry. “I got it,” I said coolly. I didn’t even take off my fighter pilot shades, nor did I accept a helmet to wear for when the coaster leaves the atmosphere on that first big hill.

I strapped into the coaster -- the only rider on this run. The others waiting to go next heckled me. “Don’t cry,” these hecklers called out, and “Hope you’re wearing a diaper.” I shrugged them off.

As the coaster climbed that first big hill, my man-ness began to dissolve. That thing just kept climbing and climbing into the clouds, and it was eventually gonna go down. I was a family man with a responsibility to live, with a 7-year-old son to help raise. What the heck was I doing?

That coaster took the life out of me. My Oh Yeah! shirt turned into an Oh No! shirt. My fighter pilot shades turned into Hello Kitty glasses. And my killer Psyclone sandals turned into Crocs.

When the coaster came to a stop, my face must’ve said it all. The hecklers in line laughed, hung me from the proverbial hook. I couldn’t respond. I had to make sure I survived first. I had. That fact alone helped bring on my victory face. That’s right, I thought, I did conquer Death Coaster. I destroyed that thing, killed it.

“Aren’t you gonna ride it backwards?” The Crasher asked me. I only barely survived that thing, I thought. Is this guy out of his mind? But I’m a man and men never say no. So I said, “I’m so in,” and got back into the coaster.


The hecklers razzed me some more. “You want us to get your mommy?” they shouted, and “Premium Pampers give you 12-hour protection with three layers of absorbency.”

Going up that first hill I tightened my safety harnesses so tight I couldn’t breathe. I was really going to miss my family, miss even my son’s teenage years.

The coaster took off backwards and I was dead by the first loop. My Oh No! shirt turned into an Oh, You Fool! shirt. My former fighter pilot shades were lost in space. And my sandals had become Cracker Jack toys. I really wished I had those three layers of Premium Pamper absorbency.

When it was all over, I realized I didn’t actually die. I got out of that coaster faster than you could drop twenty bucks at a movie theater.

The Crasher asked how I liked it. Those in line anticipated my response. Death Coaster was not safe at all. I couldn’t let anyone go on it. They wouldn’t survive. And then I heard the hecklers, poking at me for my reply.

“The coaster is awesome,” I finally said. “Next!” I called out.