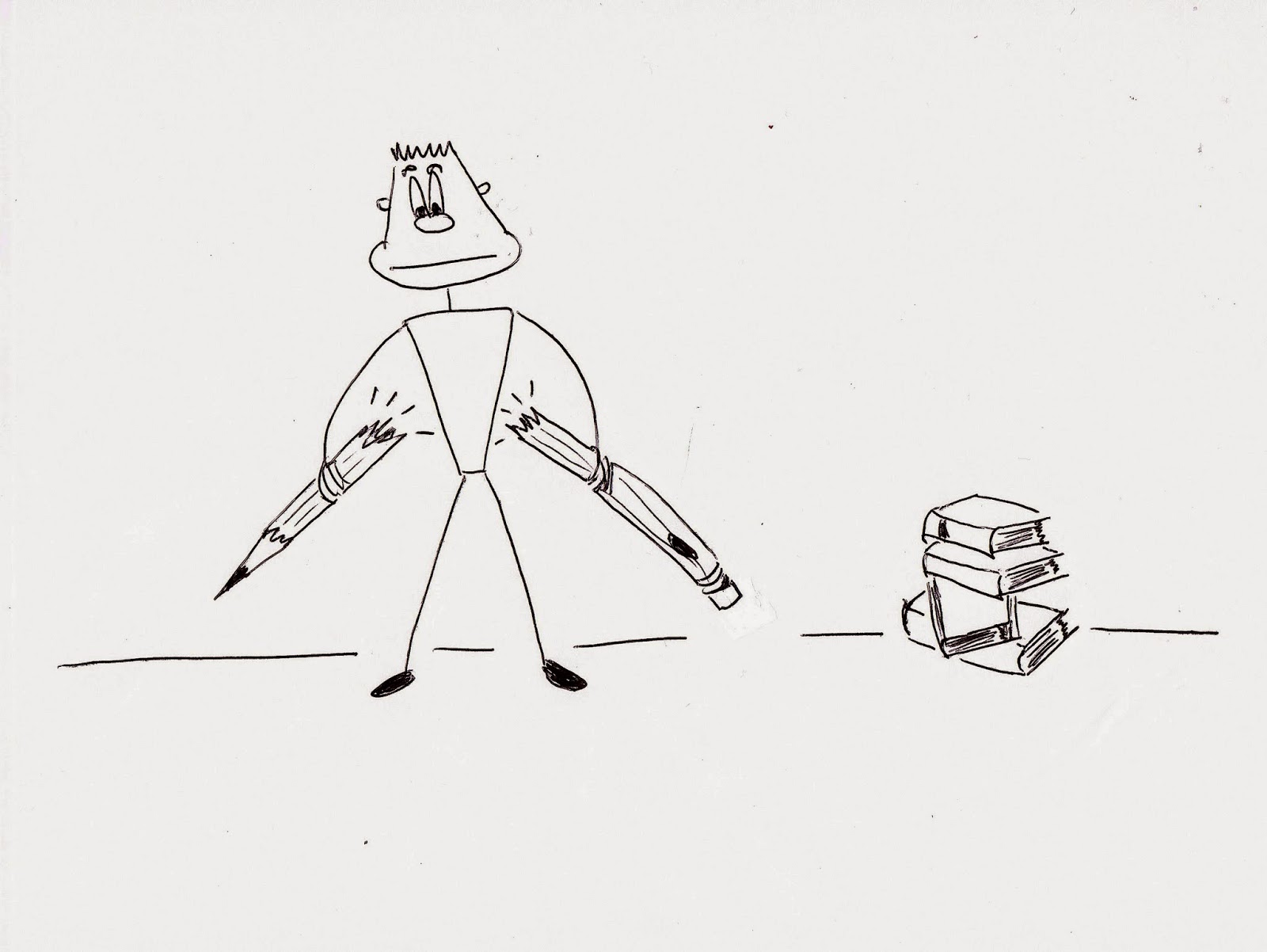 Fifth grade is a giant leap for an elementary school student, and my 10-year-old son had to be ready. The opposition this year would be fierce.

I’d originally planned a rigorous training schedule for my son’s entire summer vacation, but somehow the break got away from us. The two days before school began would have to suffice.

“I’ll be fine,” my son said when I shouted it was time to hit the books.

The kid always assumes everything will be fine. And just because it usually is, it doesn’t mean he shouldn’t be an over-worrier like me.

I shot a math problem at him. He failed.

OK, maybe 1,027 multiplied by 165 is a little difficult without a pencil and paper. But it made the kid realize he had work to do. He’d also have to pick up the intensity.

Right away, my son and my program didn’t get along.

“This work is too bossy,” he complained. “It always wants to know what I just read or what the chances are of getting a red marble in a bag of forty red marbles, thirty blue marbles and ten green marbles.”

Yup, fifth grade was going to be rough on my boy.

I purchased several cases of Gatorade to provide hydration for my son while he exercised his mind.

“But Daddy, Gatorade doesn’t hydrate,” he said when I threw him a bottle as he transitioned from the study of Mayan culture to the examination of earthquakes and tsunamis as they affect ocean life.

“Gatorade does so hydrate,” I replied. “I refueled with it when I played football.”

“No,” he said, “it gives you electrolytes, but it’s full of sugar and bad chemicals and very little water content. It’s better to just drink water.”

“How do you know?” I asked him. “You don’t even know the entire periodic table of elements.”

“Actually, Mommy and I did an extensive study of the elements when you were at work one day. As for the accusation that Gatorade doesn’t hydrate, I learned about that from Mommy’s ‘Health Tip Diva’ podcast.”

After exchanging the Gatorade for bottled water, I devised a new strategy: Mommy could help the kid prepare. After all, she’s a teacher. And she has those really helpful podcasts.

Mommy had trouble from the beginning. Her pupil kept getting up -- getting water, getting the phone, getting restless, getting nothing done. Even my wife, who educates middle school children in a rough neighborhood, couldn’t get our son on track.

On the evening before the first day of school, I tested our boy to see what he’d accomplished. I made the problems more difficult than they should’ve been. I also invited some kids over and had them run around the room to simulate a typical classroom environment. And guess what? Our boy didn’t pass.

At dinner, no one talked. We barely ate. And then it hit me: “I guess it’s up to the teacher now.”

After we finished eating, the kid went to his room. He sharpened his pencils, laid out his clothes, set his alarm clock, packed enough water in his backpack to stay hydrated for the day.

“I’m ready to learn,” he finally announced with new focus and determination.

The next day, we tried to kiss him goodbye (unsuccessfully, because that would be embarrassing to a 10-year-old) and we wished him luck. He was off to dominate fifth grade.

My wife and I smiled. It was going to be OK after all.

Until the yard duty busted him for running.

It’s gonna be a rough year. 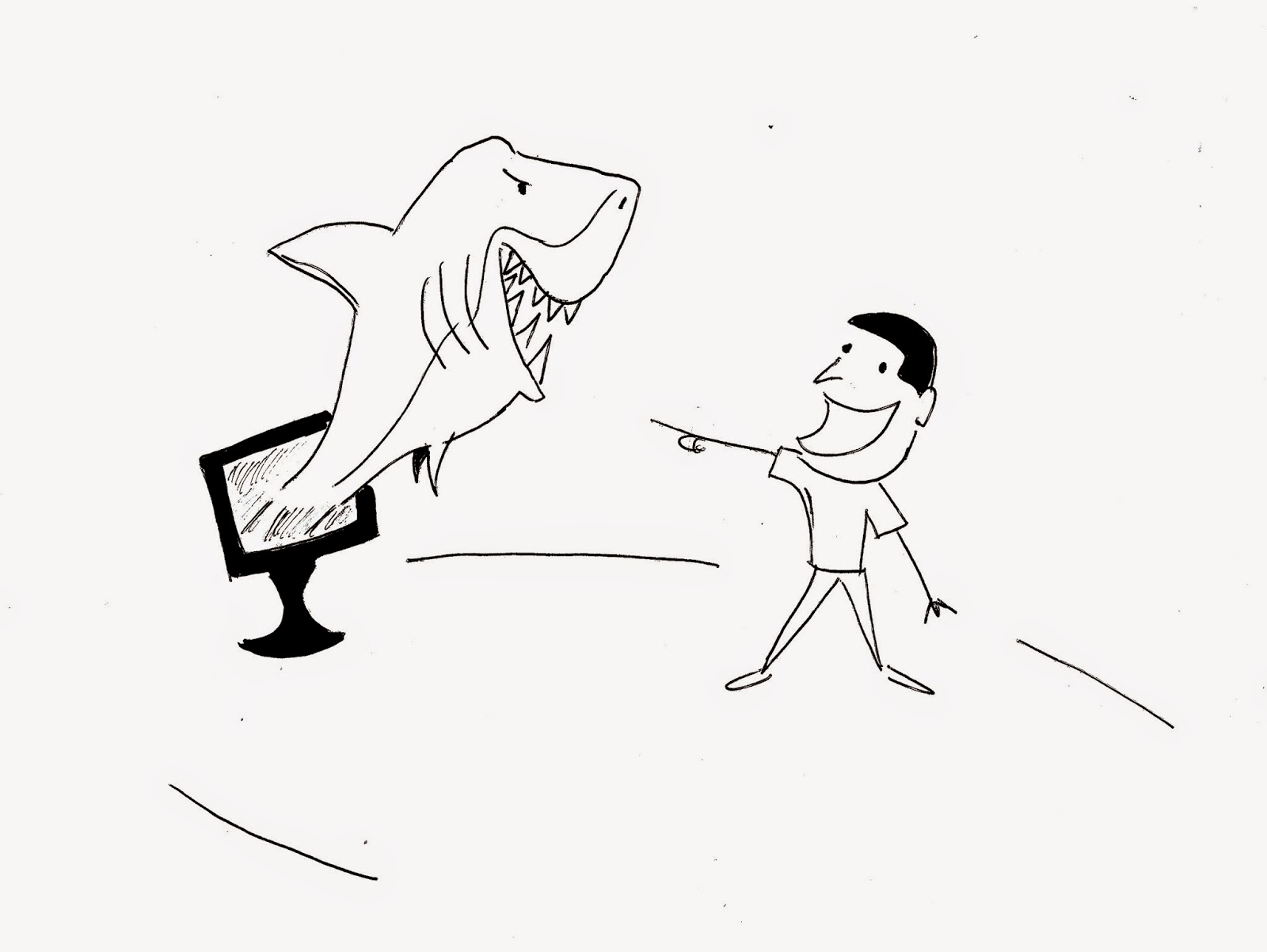 Remember the “Charlie Brown” animated holiday specials? Everyone tuned in . . . at the same time. And it was all people would talk about the next day. Now we watch programs at any time, no matter when the shows air, thanks to our DVRs, DVDs and that cloud over our heads. And we do it alone.

People say going to the movies is still a communal experience. But is it? Most of the time the audience is texting, video gaming, Facebook updating -- we’re in our own worlds. In an age when technology has made communication so simple, communication is at its worst.

What we need is something to bring us together again.

I suggest the upcoming “Shark Week” on Discovery Channel, celebrating and investigating a creature that’s been on Earth more than 350 million years.

“You’re both wrong,” I responded. “Everyone’s gonna love it.”

I decorated for the occasion two weeks in advance. Come Aug. 4, the house would be ready for shark TV 24/7.

I crafted a Shark Week door hanger for the front door, hung a shark flag out front. The table I use for the manger scene at Christmastime was perfect for the shark habitat I created using my son’s collection of toy shark figures, complete with miniature great white sharks, tiger sharks, hammerhead sharks and even Bruce the shark from the movie “Finding Nemo.”

Do you think a tree with shark ornaments is too much? My wife thought so. She felt I was treating Shark Week like it was a holiday.

It is a holiday, a most wonderful time of the year, a time for family and friends to come together and pay tribute to a beast whose bite offers up to 132 pounds of pure force per tooth. With as many as 3,000 teeth, though typically only a few dozen, that’s a heck of a bite.

“Shark Week isn’t just another one of my wacky obsessions,” I told my wife. “It’s the last remaining communal event on TV, where we can come together and enjoy quality shark content and share our responses to what we saw with the rest of the world tuning in.”

She told me that the same communal phenomenon is true for the Oscars, “Survivor,” championship ball games and Southern California police pursuits.

She was right. Boy, was I wrong.

So that gave my wife and son their out.

As I sat alone on the living room couch, surrounded by massive amounts of shark décor, I let the fact that I’d be spending Shark Week unaccompanied sink in.

Fine, I thought. I’ll keep the joy of Shark Week to myself. But I got news for them -- no one else is gonna eat one piece of my shark-shaped cheesecake. And when Sharka Jaws comes down the chimney with his big bag of toys, there’ll be nothing for anyone but me.

My wife had news for me -- she also has access to the checking account. She and our son would do something fun on their own. And they’d get their own gifts.

It wasn’t long before they had a whole trip planned for the seven days of Shark Week. And we’d be spending the week apart, which was totally against my original intentions.

So I decided to add myself to their plans. And I’d just record all of Shark Week on our DVR to watch when we return.

Hey, sharks have been here since before the dinosaurs. They’ll be here when we get back.