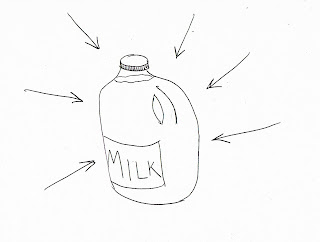 Outside, Bad Guy is armed, dangerous. He breaks into Good Guy’s house. If only Good Guy could hear Bad Guy down the hall, he could reach into his end table for that pistol and defend himself.

But Bad Guy enters Good Guy’s bedroom. He raises his weapon, aims it at Good Guy . . .

Just then, Good Guy springs out of bed, retrieves the pistol from his end table, turns to Bad Guy, aims his weapon and pulls the trigger before Bad Guy can even think about firing.

Good Guy has no bullets! No bullets! Bad Guy blasts Good Guy down.

I’m Good Guy in that scenario. And that’s exactly what happened to me the other night. Sort of.

I got home very late from work and was hungry. I poured myself some cereal, opened the refrigerator . . . We had no milk! No milk! It was like being shot in the chest. I couldn’t breathe. It was worse than death.

So I woke my wife.

“Sweetie,” I said. “Do you know what happened to the milk?”

“We drank the last of it at dinner,” she admitted, ratting out herself and our 8-year-old son.

“I wonder if any stores are still open,” I said, knowing everything around was closed.

My wife said I didn’t need my nightly milk. Then she assaulted me with a list of other foods and drinks I could consume instead. I could make a salad or a sandwich, and I could drink some water or unsweetened iced tea. I was wise to her parlor tricks. She always wants me to eat and drink healthy.

“You can make oatmeal,” she suggested.

That was an insult. Who likes oatmeal?

I considered a long drive to the nearest open-all-night store I could find. But it was late and my family and I had to get up early in the morning to drive down south for some event my wife planned.

I decided to go without my precious milk for the night. I’d just get up even earlier in the morning and run to the store so I wouldn’t miss out on my morning cereal and glass of milk.

And that’s just what I did. I got up real early and, as I was making my way out the door, my wife stopped me and asked if I could take our son.

At the store, my son slowed me down. We had to stop and talk with the librarian from school.

“No more talking to anyone,” I said when we finally broke away.

“But I never saw Mrs. H. outside of school,” he said. “Now I know what she’s like when she’s shopping.”

I grabbed a carton of milk, but at the register my wife called me on my cell phone and asked me to pick up a few other items. I left the register, ran through the store to get the stuff she needed, and was back in time to wait in a long line during the big morning rush I’d previously missed.

Finally, we got to the car. When my son and I were almost home, my wife called again with one last request. I had to go back to the store. My cereal and that glass of milk could wait.

My son and I eventually made it home. And then I tore into the grocery bags. The milk was gone.

“Maybe you left it at the store,” my wife offered.

“I don’t have time to go back and get it,” I said. “We have to leave in 15 minutes, and I still have to eat something, shave, shower and pack the car.”

My wife and kid sat down for their oatmeal. I made myself some oatmeal, too. I sat and ate it and didn’t say a word. But my family sure squawked. Their yums and mmmms sounded like they were eating the greatest meal ever prepared. And there I was eating what I thought tasted like unflavored paste.

I pushed my oatmeal aside. Got up. Grabbed a water pitcher. Left the house.

I went next door and asked the neighbor for some milk. He said he bought too much, that it would go bad before he could drink it. He was going to call me to see if I wanted it.

Now, when has anyone ever asked if you wanted an extra gallon of milk? That just doesn’t happen in real life. But it happened to me. And my cereal and glass of milk that morning were amazing. I even got the family out of the house on time, thanks to my daily serving of milk.

A few days later, as I was driving, I had a thought. I pulled over, opened the trunk, dug to the back, and there it was: the cause of that rotten smell I detected during the drive—the carton of milk I thought I left at the store.


I drank it anyway.