Wii Are Having a Party 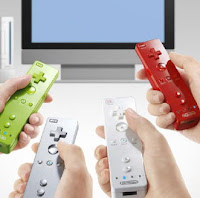 My 7-year-old son showed me how to open a bottle of Flinstones kids’ vitamins, then he said, “Look, Daddy, I can get past the child lock.”

The boy assured me he’d never touch the vitamins again.

Okay, so that’s a good reason to have a nervous breakdown. But for me, even the smallest things get me worked up.

“There are supposed to be three ‘click’ pens in the jar near the kitchen phone,” I said to my wife, “not four. Where’d this extra one come from?”

More concerned about my behavior than the unexpected appearance of the fourth Bic Clic Stic, my wife sat me down, told me to stop stressing about the minute details of the house and asked if I needed a break.

“I just wanna know where that extra pen came from,” I said.

“Maybe you’re working too hard,” she said. “Maybe you should take some time for yourself, do something fun.”

I made the mistake of saying, “That’s a good idea.”

“We should have a party,” she suggested. “That’d be fun.”

Hosting a party would not be fun. It’d be work. It’d be a mess.

My head ached just thinking about it. Without even looking around, I knew what I was in for: shoes all over the house to pick up, loose mail on the counter to go through, no vacuum lines in the carpet. My son’s dump truck lunchbox is always parked all over the house, so I’d have to find that before a guest did. And I still had to find where that extra pen came from. What a nightmare.

“So, do you wanna have a Wii party?” my wife asked.

Whenever we have people over, my wife likes to make something sweet to eat, something she’s never made before. This time it would be a double chocolate layer, triple fudge cake. My wife was excited to bake it. My son was drooling to eat it. I feared for my life like the victim in a horror movie -- my son and any kind of chocolate cake doesn’t mix. There’s mess on his hands, mess on his face, mess on his clothes and on the furniture . . . mess on me!

“What’s wrong?” my wife asked when she saw me stressing out.

This party was a terrible idea, that’s what was wrong.

On the day of the party, I got up early and got working. That’s when I met a new version of my son -- Little Mr. Clean. He was cleaning dust off of the baseboards with a Q-tip, hunting for rogue fuzzes in the carpet with tweezers and demanding a few squirts of Febreze air freshener in every room of the house. He was just like his dad -- this kid was freakin’ nuts.

Once the house was clean, I got to work on the second most important part of the party: the snack table. This was fun. I taught my son a very important lesson: No party is complete without pub mix.

As the day progressed, I felt like the party planning hadn’t. We still had food to prepare, Wii game score cards to make . . . This party couldn’t get worse. Then the phone calls poured in. So-And-So was bringing So-And-So to the party, What’s-His-Name was bringing What’s-Her-Name, and Bill was bringing some friends from work.

Who the heck was Bill?

So I quit. I sat on the couch and waited for our guests to arrive.

After the party, I asked my son to use his newfound skills opening child-locked bottles and get me three Advil.

“Wait! Stop!” I said, physically stopping him in his tracks.

And that’s the story of how I almost really lost my mind . . . and my kid to Child Protective Services.