Anything But Light-Up Shoes 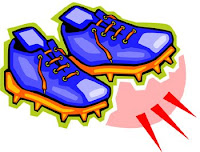 My son’s fifth birthday is in July, and last month I worried that I wouldn’t figure out in time what to get him.

Drums are too loud, paint sets are too messy and light-up shoes, I’m told, are dangerous to the kids wearing them and to the environment. What, then, do I get a boy with so much?

My wife told me not to stress out until at least a month before his birthday. We still had about five months to go, she said.

The apple doesn’t fall far from the tree, as my mom called around that same time to ask what her grandson wanted for his birthday.

I told my mom that I’d heard you couldn’t throw light-up shoes in the trash because when they’re crushed they emit toxic fumes. I also told her that I’d heard the shoes have exploded on kids’ feet.

My mom laughed at me for believing such nonsense. Though I remember when she wouldn’t let me chew on the wax lips I collected while trick-or-treating on Halloween because, as she told us, the FDA (Food and Drug Administration) found a possible connection between the waxes used in the lips and Hepatitis A.

Luckily, my mom had no interest in getting the drums or paint set for my son, but she seemed very fascinated with the light-up shoes.

“He has to have light-up shoes,” my mom said.

Enter my stepfather, who, when my wife and I told him “No cake,” gave our son cake.

I knew my stepfather’s game. If I told him he couldn’t buy my son light-up shoes, he’d buy them just because I said not to buy them. But I wasn’t going to back down. My wife and I are the bosses of our child, and what we say goes. So I told both my mom and stepfather that nobody would buy the boy light-up shoes, even though I knew for a fact that my stepfather would go out of his way to buy the shoes against my wishes just to spite me.

To my surprise, both my mom and stepfather agreed that they wouldn’t buy the light-up shoes for my son’s birthday. I won that battle. I’m the boss, see?

A couple days later, some light-up shoes showed up in the mail from my parents. My son loves the shoes.

“I have light-up shoes just like my friends at school,” he told everyone.

My son stopped walking. Instead, he stomped his feet -- even when he was standing still. (The lights illuminate when the shoes hit the ground.) My wife and I took the boy to the movies, and while I was returning from the concession stand, I found it easy to spot our seats because I saw my son’s light-up shoes from a distance in the darkened theater. He was stomping his feet on his seat to see his shoes light up in the dark. He did that all through the picture. The audience loved us.

My son made a habit of walking into stationary objects because he was looking at his shoes light up instead of watching where he was going. I hate those light-up shoes.
But I found that I couldn’t hate them that much because my son loved them so much. I slowly began to like the shoes more and more.

And that’s when my son experienced a major growth spurt and outgrew the shoes. He was so sad that he couldn’t wear the shoes anymore. I was sad to see him sad, but glad because I knew what to get the boy for his birthday. So I went to the store and bought another pair of light-up shoes.

I’ve since learned that light-up shoes aren’t as dangerous as I’d heard. Those stories were false, just like the wax-lips stories my mom heard.

But, without the light-up shoes on his feet, my son was becoming more depressed than a 14-year-old girl who just broke up with her boyfriend of two weeks. I couldn’t bear seeing him so sad. So, like a weak parent, I gave my son the very shoes I was going to give him on his birthday.

My son is now a very happy little boy again. And I’m in dire need of a birthday gift idea again.

You gotta stay strong, I know its hard not to give someone the perfect present till a birthday or christmas. maybe thats why I wait till the last minute to do all my shopping.