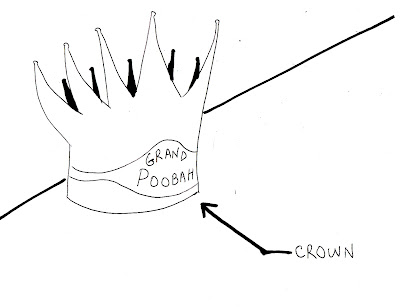 I can never say no.

I was helping my wife glue paper rainbow cutouts onto a page in one of her scrapbooks when my father-in-law called and asked me to check my e-mail. I couldn’t say no.

I don’t like confrontation and I try to stay in everyone’s good graces. So, even though I was afraid my father-in-law’s e-mail might contain painful requests like, “Can you give my daughter a better lifestyle” or “Please give her back,” I went to my computer and opened my mail.

Dear Mike, the letter began. When you married my daughter in 2000, I thought it best we combine forces to provide the highest level of male support we could achieve. Thus, the Misunderstood Husband’s Club and Rowing Society was born.

I was voted the esteemed Grand Poobah, and you, thankfully, assumed whatever other roles were left. It is with great sadness, then, that I resign my position to you, as I feel I am no longer qualified to carry on my leadership.

I stopped reading the letter right there. I couldn’t fill my father-in-law’s shoes. I didn’t have the skill, the experience or the time. How could I lead? But how could I say no?

As I continued reading my father-in-law’s e-mail, I tried imagining myself as the new head of the Misunderstood Husband’s Club and Rowing Society.

Since the beginning, our club flourished and provided support for both of us when dealing with our wives, my daughter and other assorted female friends and relations. Oftentimes, when faced with mysterious female logic, the only thing that saved the day was discussing the problem during our monthly meetings at the R.E. Pool Memorial Shelter for Downtrodden Husbands (an old Dew Drop Inn).

I recalled my father-in-law’s unequivocal headship at those meetings and his firm ability to reel in an emotional speaker. I was then reminded of the calm and cool my father-in-law exuded during the incident he described next in his e-mail.

Perhaps the best instance of our wives misunderstanding our innocent actions is best exemplified in the well-known Junk Food Jaunt. If you recall, you and I dropped our wives off at the gym, and instead of waiting out front as promised, we shuttled across the parking lot to the nearby 7-Eleven market for a sweet snack or two.

Sitting outside in the car, a gym member -- and friend of my wife and yours -- noticed us consuming the tasty treats and, upon entering the fitness center, ratted us out. When we were confronted, it was no use trying to deny our actions -- the evidence was all over our hands and faces.

Instead of receiving affirmation for taking our wives to the gym, we were chastised for consuming a perfectly legal item.

I distinctly remember the skirmish, and I remember speaking my mind openly at one of our meetings later in the week. Perhaps I spoke a little too openly. However, it was my father-in-law, the Grand Poobah, who calmed me down, who reminded me of the vow I took when I said I do—“You must,” he said, “above all, serve, protect, obey, and say, ‘Yes, dear.’”

I could never settle a shaken husband of the club that quickly or that effectively. In other words, I could never be Grand Poobah. I could never accept my father-in-law’s resignation. He would have to continue his reign.

I finished reading my father-in-law’s e-mail, which had more group nostalgia and farewell babble, and then I consulted my wife on the matter.

I used to say no all the time. When I was a kid, I’d say no to strangers if they offered candy or I’d say no to friends with dumb suggestions like, “Hey, you should roll that tire down the street into oncoming traffic.” At some point during my “growing up,” I became a pushover.

I wouldn’t be easily swayed any longer. I picked up the phone, called my father-in-law, and began talking about random subject matter until I could find a transition point to tell him no.

And then he said something that had previously slipped my mind. He said, “Had it not been for the untimely death of my wife (back in August), I would’ve continued my leadership of the club . . .”

Thus, for the first time in years, I told someone no. My father-in-law said, “You don’t have to take over as Grand Poobah if you don’t want to.” And I said, “No, I’ll be happy to take over.”

My father-in-law, according to his e-mail, will remain a mentor to the group.